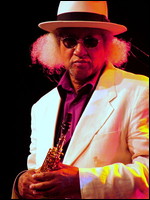 Bartz studied at the Juilliard Conservatory of Music. In the early 1960s, he performed with Eric Dolphy and McCoy Tyner in Charles Mingus's Jazz Workshop. He worked as a sideman with Max Roach and Abbey Lincoln before joining Art Blakey and the Jazz Messengers. In 1968 he was a member of McCoy Tyner's band Expansions. He recorded on Miles Davis's album Live-Evil. Then he formed the band Ntu Troop, which combined jazz, funk, and soul.[1]

Bartz was awarded the BNY Mellon Jazz 2015 Living Legacy Award, presented at a special ceremony at The Kennedy Center.[2]

In the liner notes to the album The Red and Orange Poems, jazz critic Stanley Crouch called Bartz "one of the very best who has ever picked up the instrument".

With the Rance Allen Group

This article uses material from the article Gary Bartz from the free encyclopedia Wikipedia and it is licensed under the GNU Free Documentation License.

You Gotthard
Update Required To play the media you will need to either update your browser to a recent version or update your Flash plugin.