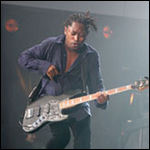 Darryl Jones (born December 11, 1961),[1] also known as "The Munch",[2] is an American bass player for The Rolling Stones. He has also played in bands with Miles Davis and Sting.

Jones was born in Chicago, Illinois.[1] His father, a drummer, taught him drums and xylophone. When Jones saw a neighbor playing bass in a school talent show, he switched to bass.[1] He attended Southern Illinois University Carbondale.

He started his music career as a studio musician in New York City, playing often with Vince Wilburn, Jr., the nephew of Miles Davis. When Wilburn told him Davis was looking for a bass player, he called Davis and eventually went on tour with him in 1983.[3] Jones recorded on Davis's albums Decoy (1984) and You're Under Arrest (1985).

In 1985 he became a member of Sting's band with Branford Marsalis, Kenny Kirkland, and Omar Hakim. With Sting he recorded the album Dream of the Blue Turtles, the live album Bring on the Night, and appeared in the documentary of the same name about the band's formation and tour.

Jones is a member of the Stone Raiders and has performed or recorded with the Headhunters, Steps Ahead, Mike Stern, John Scofield, Eric Clapton, and Madonna.

This article uses material from the article Darryl Jones from the free encyclopedia Wikipedia and it is licensed under the GNU Free Documentation License.

Waiting On The World To Change Pat Burgener feat. Marius Bear
Update Required To play the media you will need to either update your browser to a recent version or update your Flash plugin.