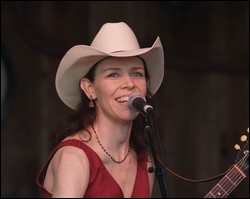 Gillian Howard Welch (born October 2, 1967 in New York City)[1] is a singer-songwriter whose musical style combines elements of bluegrass, neotraditional country, Americana, old-time string band music, and folk into a rustic style that she dubs "American Primitive".[2] Her recordings feature the harmonies and unconventional guitar work of her musical partner, David Rawlings. Welch pronounces her first name with a hard G IPA: // rather than IPA: /d/.

Welch was born in Manhattan and was adopted when she was three days old. She moved to Los Angeles at the age of four. On her eighth birthday she wished for and got a guitar and lessons, and learned soon to play the guitar. Studying at the University of California, Santa Cruz,[3] Welch discovered bluegrass music through the "mountain soul" stylings of The Stanley Brothers.[4] After a short stint in a local camp band called Söfa, Welch moved to Boston and studied at the Berklee College of Music.

In Boston, Welch met and began dating David Rawlings, who would become her long-time musical partner. In 1992, they moved to Nashville and began building a career. In Nashville, she met T-Bone Burnett,[5] producer to such artists as Los Lobos, Sam Phillips, Bodeans, Counting Crows, and Elvis Costello. In 1996, Welch released her first album, Revival, which was nominated for a Grammy for Best Contemporary Folk Album in 1997.[2] Since then, she has recorded other albums and collaborated on the songs "Didn't Leave Nobody But the Baby" and "I'll Fly Away" on the Grammy-winning soundtrack of the Coen Brothers hit film O Brother, Where Art Thou?.[6] Welch also had a cameo in the film, as a woman in a record store trying to obtain a copy of the Soggy Bottom Boys' recording of "Man of Constant Sorrow".

Welch has also collaborated with good friend and singer/songwriter Ryan Adams on the albums Heartbreaker and Demolition. She and Rawlings toured with Emmylou Harris, Patty Griffin, and Buddy Miller in 2004 as The Sweet Harmony Traveling Revue. Welch and Rawlings have collaborated with Old Crow Medicine Show and appear in their video of their song "Wagon Wheel". Recently, Welch and Rawlings have been touring with Bright Eyes in 2007 on their American Cassadaga tour. Also in 2007, her song Elvis Presley Blues was covered by Jimmy Buffett on his Take the Weather With You album. Her song "My First Lover" is featured in the motion picture The Strangers.[7] Welch and Rawlings made surprise appearances in Baltimore, Maryland; Washington, D.C.; Richmond, Virginia; Norfolk, Virginia; and Asheville, North Carolina opening for Rilo Kiley in June 2008 to showcase new songs the two had been working on.

This article uses material from the article Gillian Welch from the free encyclopedia Wikipedia and it is licensed under the GNU Free Documentation License.