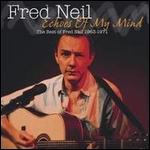 Frederick Neil (March 16, 1936 – July 7, 2001)[1] was an American folk singer-songwriter in the 1960s and early 1970s. He did not achieve commercial success as a performer[2] and is mainly known through other people's recordings of his material – particularly "Everybody's Talkin'", which became a hit for Harry Nilsson after it was used in the film Midnight Cowboy in 1969.[1][3] Though highly regarded by contemporary folk singers,[2] he was reluctant to tour and spent much of the last 30 years of his life assisting with the preservation of dolphins.[3][4]

Born in Cleveland, Ohio, and raised in St. Petersburg, Florida, Neil was exposed to music at an early age, travelling around the US with his father, who was a representative for Wurlitzer jukeboxes.[5] Neil was one of the singer-songwriters who worked out of New York City's Brill Building, a center for music industry offices.[6] While composing at the Brill Building for other artists, Neil also recorded six mostly rockabilly-pop singles for different labels as a solo artist.[5] He wrote songs that were taken by early rock and roll artists such as Buddy Holly ("Come Back Baby" 1958) and Roy Orbison ("Candy Man" 1961).[7]

Neil met Vince Martin in 1961, and they formed a singing partnership;[8] his first LP, Tear Down The Walls (1964) was recorded with Martin.[9] During 1965 and 1966 Neil was joined on many live sets by the Seventh Sons, a trio led by Buzzy Linhart on guitar and vibes. Neil released Bleecker & MacDougal on Elektra Records in 1965,[10] reissued in 1970 as A Little Bit of Rain. His album Fred Neil, released in 1967, relaunched in 1969 as Everybody's Talkin', was recorded during his residencies in Greenwich Village and Coconut Grove, Florida, with one session taking place in Los Angeles.[9]

After "Everybody's Talkin'", Neil's best-known song is "The Dolphins", which was later recorded by several artists, including Linda Ronstadt, It's a Beautiful Day, Billy Bragg, and Tim Buckley, for whom Neil was a major influence.[5]

Interested in dolphins since the mid-1960s, when he began visiting the Miami Seaquarium, Neil and Ric O'Barry founded the Dolphin Research Project in 1970, an organization dedicated to stopping the capture, trafficking and exploitation of dolphins worldwide.[5] Increasingly involved in that pursuit, Neil progressively disappeared from the recording studio and live performance, with only occasional performances in the rest of the 1970s.[5]

Neil left Woodstock in the mid-1970s and spent his remaining decades on the shores of southern Florida, involved in the Dolphin Project. Following a guest appearance with Stephen Stills at New York City's Madison Square Garden in 1971, Neil began a long retirement, performing in public mostly at gigs for the Dolphin Project Revue in Coconut Grove. He played a benefit show for the Revue in Tokyo in 1977. He performed with his core group of John Sebastian on harmonica, Harvey Brooks on bass, and Pete Childs on guitar at the Montreux Jazz Festival in July 1975.[11] Michael Lang, one of the organizers of the 1969 Woodstock Festival and a habitué of Coconut Grove in the 1970s, tried unsuccessfully to release this as a live LP. Neil's last public performance was in 1981, at an outdoor concert at the Old Grove Pub in Coconut Grove, where he joined Buzzy Linhart for one song and stayed onstage for the rest of the set.

Many of Neil's 1970s recordings remain unissued, including a 1973 session with Quicksilver Messenger Service guitarist John Cipollina and some Woodstock recordings with guitarist Arlen Roth. In a later interview, Ric O'Barry claimed that Neil recorded two albums of cover songs in 1977 and 1978 but that they had been buried by Columbia Records.[12] According to Barry, he produced the first of the recordings in the sessions in Miami. Neil was joined by Pete Childs on guitar, John Sebastian on harmonica, and Harvey Brooks on bass. The second album was more fully arranged, with Neil accompanied by the New York session band Stuff and some old friends, including Slick Aguilar. The songs on these albums were written by Bobby Charles, John Braheny, Bobby Ingram, Billy Joe Shaver, and Billy Roberts (composer of "Hey Joe").

Neil gained public recognition in 1969, when Nilsson's recording of "Everybody's Talkin'" was featured in the film Midnight Cowboy; the song became a hit and won a Grammy Award. He was one of the pioneers of the folk rock and singer-songwriter musical genres,[13][14] his most prominent musical descendants being Tim Buckley,[15] Stephen Stills,[16] David Crosby and Joni Mitchell. His most frequently cited disciples are Karen Dalton, Tim Hardin, Dino Valenti, Vince Martin, Peter Stampfel of the avant-folk ensemble the Holy Modal Rounders, John Sebastian (the Lovin' Spoonful),[16] Gram Parsons,[17] Jerry Jeff Walker, Barry McGuire,[16] and Paul Kantner (Jefferson Airplane).[18][16] Some of Neil's early compositions were recorded by Buddy Holly and Roy Orbison. He played guitar on the demo version of Bobby Darin's 1958 hit "Dream Lover" and was a demo singer on a late-1950s Elvis Presley movie soundtrack session.

In Neil's obituary in Rolling Stone, Anthony DeCurtis wrote, "So why is Neil a hero to David Crosby? Because back when Crosby was an aspiring folkie who just arrived in New York, Neil bothered to take an interest in him, just as he did for the young Bob Dylan, who backed Neil on harmonica at the Cafe Wha? in Greenwich Village. 'He taught me that everything was music,' Crosby says."[19]

In his memoir, Richie Havens recalled Neil and his then-partner Vince Martin making an entrance through the audience, without microphones, and getting the audience up and clapping by relying only on their harmonious vocals.

Anthologies including tracks by Neil

This article uses material from the article Fred Neil from the free encyclopedia Wikipedia and it is licensed under the GNU Free Documentation License.