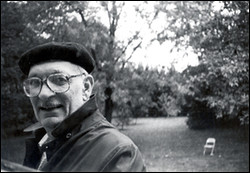 George Crumb (born October 24, 1929) is an American composer of contemporary classical music. He is noted as an explorer of unusual timbres, alternative forms of notation, and extended instrumental and vocal techniques. Examples include seagull effect for the cello (ex. Vox Balaenae), metallic vibrato for the piano (ex. Five Pieces for Piano), and using a mallet to play the strings of a contrabass (ex. Madrigals, Book I), among numerous others. He is not an electronic music composer; however, many works call for amplification of instruments, such as Black Angels (string quartet) or Ancient Voices of Children (mixed ensemble). Crumb's music contains an intense humanism, which is reflected in his personal definition of music: "a system of proportions in the service of spiritual impulse."[1]

Crumb was born in Charleston, West Virginia, and began to compose at an early age. He studied music first at the Mason College of Music in Charleston where he received his Bachelor's degree in 1950. He obtained his Master's degree at the University of Illinois at Urbana-Champaign, and then briefly studied in Berlin before returning to the United States to study at the University of Michigan, from which he received his D.M.A. in 1959.

Crumb has earned his living primarily from teaching. His first teaching job was at a college in Virginia, before he became professor of piano and composition at the University of Colorado in 1958. In 1965 he began a long association with the University of Pennsylvania, becoming Annenberg Professor of the Humanities in 1983.[2] Some of his most prominent students include Margaret Brouwer, Uri Caine, Christopher Rouse, Osvaldo Golijov, Jennifer Higdon, Cynthia Cozette Lee, Yen Lu, James Primosch, Ricardo Zohn-Muldoon, Ofer Ben-Amots, Morris Rosenzweig and Gerald Levinson.

Crumb retired from teaching in 1997, though in early 2002 was appointed with David Burge to a joint residency at Arizona State University. He has continued to compose.

Crumb has been the recipient of a number of awards, including the Pulitzer Prize for Music in 1968 for his orchestral work Echoes of Time and the River and a Grammy Award for Best Contemporary Composition in 2001 for his work Star-Child .

After initially being influenced by Anton Webern, Crumb became interested in exploring unusual timbres. He often asks for instruments to be played in unusual ways and several of his pieces, although written for standard chamber music ensembles, call for electronic amplification.[4]

Crumb's compositions often incorporate theater as an element of performance. In several pieces he asks players to leave and enter the stage during the piece. He has also used unusual layouts of musical notation in a number of his scores. In several pieces, the music is symbolically laid out in a circular or spiral fashion.[5]

Several of Crumb's works, including the four books of madrigals he wrote in the late 1960s and Ancient Voices of Children, a song cycle of 1970 for two singers and small instrumental ensemble (which includes a toy piano), are settings of texts by Federico García Lorca. Many of his vocal works were written for the virtuoso mezzo-soprano singer Jan DeGaetani.

Black Angels (1970) is another piece which displays Crumb's interest in exploring a wide range of timbres. The piece is written for electric string quartet and its players are required to play various percussion instruments and to bow small goblets as well as to play their instruments in both conventional and unconventional ways. It is one of Crumb's best known pieces, and has been recorded by several groups, including the Kronos Quartet.[6]

Another of Crumb's best known works are the four books of Makrokosmos.[7] The first two books (1972, 1973), for solo piano, make extensive use of string piano techniques; the third, known as Music for a Summer Evening (1974), is for two pianos and percussion; the fourth, Celestial Mechanics (1979), was written for piano four-hands. The title Makrokosmos alludes to Mikrokosmos, the six books of piano pieces by Béla Bartók; like Bartók's work, Makrokosmos is a series of short character pieces. Apart from Bartók, Claude Debussy is another composer Crumb acknowledged as an influence here; Debussy's Preludes comprise 2 books of 12 character pieces, whose titles appear at the end. Crumb's first two books of Makrokosmos for solo piano contain 12 pieces, each bearing a dedication (a friend's initials, however he also wittily dedicates a piece to himself) at the end. On several occasions the pianist is required to sing, shout, whistle, whisper, and moan, as well as play the instrument conventionally and unconventionally. Makrokosmos was premiered by David Burge, who later recorded the work.[8]

During the 1990s Crumb's musical output was less prolific, but since 2000 Crumb has written several works subtitled American Songbook. Each of these works is a set of arrangements of American hymns, spirituals and popular tunes: Crumb originally planned to produce four such volumes,[9] but in fact he continued to produce additional sets after the fourth (The Winds of Destiny) was written, with the seventh volume of the series (Voices from the Heartland) being completed in 2010. Typically these settings preserve the familiar tunes more-or-less intact,[10] but the accompaniments for amplified piano and percussionists use a very wide range of musical techniques and exotic sounds. In his most recent compositions, which have the subtitle Spanish Songbook, Crumb returns to settings of Lorca.

Crumb's works are published by the C. F. Peters Corporation. Recordings of Crumb's music have appeared on many labels, including several LPs issued by Nonesuch Records in the 1970s. More recently, Bridge Records, Inc. has issued a series of CDs, the "Complete Crumb Edition".

This article uses material from the article George Crumb from the free encyclopedia Wikipedia and it is licensed under the GNU Free Documentation License.

Loin Nolwenn Leroy
Update Required To play the media you will need to either update your browser to a recent version or update your Flash plugin.