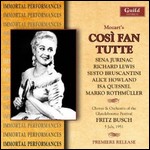 In many operas, her repertoire included more than one major role: Cherubino and Countess Almaviva, Donna Anna and Donna Elvira, Fiordiligi and Dorabella, Amor and Eurydice, Leonore and Marzelline (Fidelio), Marina and Fyodor (Boris Godunov); Octavian, occasionally Sophie and finally the Marschallin. She also played supporting roles in The Ring of the Nibelung: Woglinde, Gutrune and several of the Norns.

She débuted as Mimi at Zagreb in 1942. In the following two years she sang the Countess, Freia, and Isabella in the première of Werner Egk's Columbus. In 1943, she won a scholarship to attend Anna von Mildenburg's summer course at the Salzburg Mozarteum.[2] In 1944, she was engaged by the Vienna State Opera, where she was first nicknamed "Sena". Conductor Karl Böhm's secretary suggested it because she feared the pronunciation of "Srebrenka" would cause difficulties for many Austrians. Because of the war, and the consequential closing of the opera three days after her arrival, she was unable to sing at the Vienna State Opera until 1946, when her first role was Cherubino. In the first year at the Staatsoper, she sang more than 150 performances. She remained associated with the company for nearly forty years, receiving an honorary membership of that august organization with the title of Kammersängerin as well as the Mozart Medal.

In the autumn of 1946, she appeared at Covent Garden with others of the Vienna company, singing Dorabella. Her Salzburg Festival début was in 1947. She appeared at La Scala as Cherubino, and became established as one of the Wiener Ensemble (together with Irmgard Seefried, Elisabeth Schwarzkopf, Christa Ludwig, Lisa della Casa, Anton Dermota and others). In 1951, she made the first recording of Richard Strauss's Four Last Songs after Kirsten Flagstad had sung the world premiere in London.[3]

She often visited England, where between 1951 and 1956 she sang the principal Mozart soprano roles at Glyndebourne, recording both the Countess in Figaro and Ilia in Idomeneo. She appeared regularly at Covent Garden between 1959 and 1963, singing Leonore in Fidelio under Otto Klemperer in 1961. Her American début was in the title role of Madama Butterfly, in San Francisco in 1959. Her portrayal of Octavian is preserved in the Paul Czinner film of Der Rosenkavalier, conducted by Herbert von Karajan with Schwarzkopf as the Marschallin. Her final operatic performance was as the Marschallin at the Vienna State Opera in November 1982. She continued to give recitals and master classes, and served on the juries of international singing competitions. Alongside Tomislav Nerali, she was the last surviving member from the first Croatian sound movie, Lisinski.

She was married to leading Italian baritone Sesto Bruscantini for three years, from 1953 to 1956. In 1965, she married Josef Lederle.[5]

This article uses material from the article Sena Jurinac from the free encyclopedia Wikipedia and it is licensed under the GNU Free Documentation License.

Iszyt Ritschi
Update Required To play the media you will need to either update your browser to a recent version or update your Flash plugin.