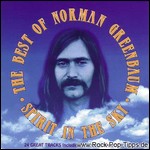 Norman Joel Greenbaum (born November 20, 1942) is an American singer-songwriter. He is best known for writing and performing the 1969 song "Spirit in the Sky".

Greenbaum was born in Malden, Massachusetts. He was raised in an Orthodox Jewish household and attended Hebrew school at Congregation Beth Israel.[1] His initial interest in music was sparked by southern blues music and the folk music that was popular in the late 1950s and early 1960s. He performed with various bands in high school and studied music at Boston University for two years. In college he performed at local coffeehouses but eventually dropped out and moved to Los Angeles in 1965.[2]

Greenbaum is best known for his song "Spirit in the Sky". The song, with its combination of 'heavy' guitar, hand-clapping, and spiritual lyrics, was released by Reprise Records in 1969. It sold two million copies in 1969 and 1970,[3] and received a gold disc from the R.I.A.A. It has subsequently been used in many films, advertisements, and television shows.[3]

Although "Spirit in the Sky" has a clear Christian theme, Greenbaum was and remains an observant Jew.[4][5] Greenbaum says he was inspired to write the song after watching country singers singing a song on television. In an interview Greenbaum stated that western movies were the real inspiration for "Spirit in the Sky":[6]

Ray Shasho: So that was the trigger that got you to write the song?

Norman Greenbaum: Yes. The song itself was simple, when you're writing a song you keep it simple of course. It wasn't like a Christian song of praise it was just a simple song. I had to use Christianity because I had to use something. But more important it wasn't the Jesus part, it was the spirit in the sky. Funny enough ... I wanted to die with my boots on.

Though Greenbaum is generally regarded as a one-hit wonder,[4][5] several of his records placed prominently in the charts, including "Canned Ham" in 1970, which reached number 46 on the Billboard pop chart. In 1966,[7] under the name Dr. West's Medicine Show and Junk Band, he recorded the novelty hit "The Eggplant That Ate Chicago".[7] In the 1960s Greenbaum also performed under the name Bruno Wolf with the Jim Kweskin Jug Band.[8]

Greenbaum has been a long-time resident of Santa Rosa, California.[4] He was critically injured when the car in which he was a passenger made a left turn in the path of a motorcycle on Occidental Road on March 28, 2015, killing the motorcyclist and also injuring the motorcycle passenger.[9] Greenbaum has since gone back to performing.[10]

This article uses material from the article Norman Greenbaum from the free encyclopedia Wikipedia and it is licensed under the GNU Free Documentation License.

Run My Mind Veronica Fusaro
Update Required To play the media you will need to either update your browser to a recent version or update your Flash plugin.