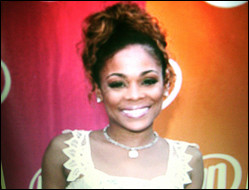 Tionne Tenese Watkins (born April 26, 1970),[1] better known by her stage name T-Boz, is an American singer, songwriter, actress, author, and executive producer. Born in Des Moines, Iowa, Watkins rose to fame in the early 1990s as a member of the girl-group TLC. She has won four Grammy Awards for her work with TLC.

Tionne Watkins was born in Des Moines, Iowa, on April 26, 1970, to James and Gayle Watkins. She is of African American, Native American and Irish descent.[2][3] Watkins' family moved from Des Moines to Atlanta, Georgia, when she was nine years old.[4]

Crystal Jones held auditions for a singing group and chose Watkins, and Lisa "Left Eye" Lopes. The group eventually attracted the attention of Perri "Pebbles" Reid and her husband, Antonio "L.A." Reid, head of LaFace Records. Jones was replaced with Rozonda "Chilli" Thomas and the group was signed in 1991 as TLC. The successful group sold more than 65 million records.[5] T-Boz has won four Grammy Awards as a member of TLC.[6]

In late 2011, VH1 announced plans to produce a biopic on TLC to air in 2013.[7] Watkins and Thomas signed on as producers. The role of Watkins was portrayed by actress/singer Drew Sidora in CrazySexyCool: The TLC Story. Watkins' daughter, Chase, portrayed a younger Tionne in the film.

In addition to her work with TLC, Watkins recorded solo singles, including: "Touch Myself" (For the soundtrack of the 1996 film Fled) and "My Getaway" (for the soundtrack to the 2000 film Rugrats in Paris: The Movie). In addition, she has been a featured vocalist on such songs as: "Ghetto Love" with Da Brat, "Changes" with Society of Soul, "He Say She Say" with Keith Sweat, "Different Times" with Raphael Saadiq and "Be Somebody" with Paula Cole. On January 22, 2013, Watkins released her first solo single in over 15 years titled "Champion". The song was released digitally, and proceeds went to help raise awareness for people suffering from blood conditions such as Sickle Cell. September 6, 2017, Watkins released her latest single digitally from her audiobook "A Sick Life" titled "Dreams."

Watkins has worked as an actress, appearing in Hype Williams' 1998 film Belly.[8] She also appeared in an episode of Living Single, the first time guest-starring along with her bandmates and another time without them. Watkins also served as one of the executive producers for the 2006 movie ATL featuring the rapper, T.I..[9] She was also featured in the music video for "It's Good" with YoungBloodZ, and appeared on The Real Housewives of Atlanta as a friend of Kandi Burruss.[10] In November 2016, she began a two-month acting stint as Sheila, a hardened prison inmate, on Days of Our Lives.[11] In 2017, she lent her voice to a character in Trolland, also known as Trollz, a direct-to-DVD CGI-animated movie.

Watkins published a book of semi-autobiographical poetry called Thoughts on November 3, 1999.[12] In 2005, Watkins and stylist Tara Brivic (who would later appear regularly on Totally T-Boz) opened a children's boutique called Chase's Closet (named after her daughter).[13][14] It was shut down years later.

Watkins' reality TV show Totally T-Boz, premiered January 1, 2013, on the TLC network.[5] The show chronicled Watkins' quest to create a solo album, reunite with bandmember, Chilli, and her life with her daughter Chase.

During 2013, alongside group-mate Chilli they executive produced the VH1 biopic CrazySexyCool: The TLC Story which aired on October 21, 2013, actress Drew Sidora portrayed Watkins.[15] Her daughter Chase portrayed a younger Tionne in the film. They also released a soundtrack album 20 marking both the band's 20-plus year legacy in entertainment business and the release of their biopic, this album included a new track written by singer Ne-Yo, "Meant to Be". They also had guest vocals on J. Cole's track "Crooked Smile".[16] TLC celebrated their return with a series of highly publicized performances which included 2 dates: VH1's Mixtape Festival in Hershey, Pennsylvania, on July 27, 2013, and Drake's OVO Fest in Toronto on August 5, 2013. They released an album, TLC, on June 30, 2017.[17]

Watkins has made a guest appearance as Pam Grier in one episode of the Adult Swim series Black Dynamite.

As a child, Watkins was diagnosed with sickle cell anemia.[18] Since the age of seven, she has been in and out of hospital due to her condition.[18] T-Boz opened up to the public about the disease in 1996;[19] she later became one of the spokespersons for Sickle Cell Disease Association of America.[20][21] In 2002, she was hospitalized for four months due to a flare-up of sickle-cell anemia.[22] She has stated that her faith in God and her optimism have helped her stay free from the more serious effects of sickle-cell disease.[18]

On August 19, 2000, Watkins married rapper Mack 10.[23] The couple's daughter, Chase Anela Rolison, was prematurely born a few months later on October 20, 2000.[4] In June 2004, she filed for divorce, and requested a restraining order against Mack 10.[24] In 2012, Watkins moved with Chase from Atlanta to Los Angeles, California, in order for Chase to be closer to her father.

In October 2009, Watkins revealed that she had secretly battled a potentially fatal brain tumor for three years.[25][26] In March 2006, she was diagnosed as having a grape-sized acoustic neuroma on her vestibular nerve that affected her balance, weight, hearing, sight, and facial movement. Many physicians refused to remove the tumor due to her sickle-cell-related complications, leaving her alternatives grim. Ultimately, she underwent surgery at Cedars-Sinai Hospital in Los Angeles.[27]

Watkins filed for bankruptcy in February 2011 and again in October 2011.[28] According to entertainment reporter Viviana Vigil, a commentator in an episode of the Reelz TV series Broke & Famous, Watkins spent $9,000 a month and owed $770,000 on her home despite a reported income of $11,000 a month.[28] Entertainment reporter Nina Parker, another commentator in said Broke & Famous episode, cited Watkins's medical bills and brain tumor.[28] A Nicki Swift video cited an ex who owed Watkins $250,000 in child support payments at the time of her Chapter 13 bankruptcy filing in October 2011.[29] Due to failure to complete proper paperwork, Watkins's bankruptcy claim was rejected in February 2012, enabling creditors and bill collectors to pursue her assets and repossess one of her vehicles.[29]

This article uses material from the article Tionne Watkins from the free encyclopedia Wikipedia and it is licensed under the GNU Free Documentation License.

Never Surrender Corey Hart
Update Required To play the media you will need to either update your browser to a recent version or update your Flash plugin.