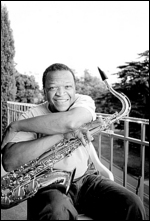 Born Robert Prince Haynes in Moncks Corner, South Carolina, United States, Kenyatta grew up in New York. He played with Bill Dixon there in the 1960s, playing with his project "The October Revolution in Jazz". Later that decade he played with Jazz Composer's Orchestra, Roswell Rudd, Sonny Stitt, Archie Shepp, and Buddy Miles among others. In the 1970s he played with Alan Silva and Andrew Hill; for a brief time he experimented with instrumental pop music during this decade as well. He moved to Europe during that decade, finding it easier to make a living there as a jazz musician.

Later, he played with musicians such as Dizzy Gillespie, B. B. King, Dr. John and George Benson, played the Montreux Jazz Festival, and went with his own groups on a European tour. He also led a jazz school in Lausanne. In 2002, Kenyatta was again back in the United States and active as a director of music in Boston.

He died in Lausanne, Switzerland in 2004.

This article uses material from the article Robin Kenyatta from the free encyclopedia Wikipedia and it is licensed under the GNU Free Documentation License.

Thoughts And Words Fred
Update Required To play the media you will need to either update your browser to a recent version or update your Flash plugin.