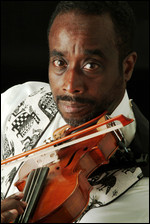 John Blake, Jr. (born July 3, 1947 in South Philadelphia, Pennsylvania) is an American jazz violinist. He has performed most prominently as a sideman in groups led by Grover Washington, Jr. (in the late 1970s) and McCoy Tyner (in the early 1980s), as well as led his own groups.[1]

This article uses material from the article John Blake, Jr. from the free encyclopedia Wikipedia and it is licensed under the GNU Free Documentation License.

Shiny Happy People R.E.M.
Update Required To play the media you will need to either update your browser to a recent version or update your Flash plugin.