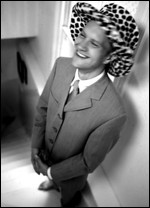 Django Bates (born 2 October 1960), is a composer, multi-instrumentalist and band leader. He plays the piano, keyboards and the tenor horn. He writes large-scale compositions on commission.

Bates was born in Beckenham, Kent, United Kingdom, and attended Sedgehill Secondary School. While at this school, he also attended the Centre for Young Musicians in London (197177), where he learned trumpet, piano, and violin. In 1977-78 he studied at Morley College.

In 1991, he started his own 19-piece jazz orchestra Delightful Precipice. He also put together the Powder Room Collapse Orchestra (which recorded Music for The Third Policeman), and created Circus Umbilicus, a musical circus show.

In recent years, Bates has concentrated on writing large scale compositions on commission. These include:

Bates worked closely with director Lucy Bailey on several theatre projects, including Gobbledegook for The Gogmagogs, Baby Doll, (Birmingham Rep, National Theatre, Albery Theatre), Stairs to the Roof (Chichester Festival Theatre), The Postman Always Rings Twice (West Yorkshire Playhouse, Albery Theatre) and Titus Andronicus(The Globe Theatre). They also worked on a short film You Can Run. Other theatre work includes Greg Dorans production of As You Like It (RSC), and Campbell Grahams Out There!.

Batess was the inaugural Artistic Director of the music festival FuseLeeds in 2004. He used this opportunity to initiate the first orchestral commission for Jonny Greenwood (Radiohead). Django also commissioned sixty composers including Laurie Anderson, Gavin Bryars, Sir Patrick Moore and John Zorn, to write one bar each. He then quilted these bars into the piece "Premature Celebration", which was performed by Evan Parker and the London Sinfonietta to celebrate Evans 60th birthday.

In 2002, he was a tutor at the Banff Centre jazz programme alongside Jim Black and Dave Douglas.

In September 2011 Django Bates was appointed Professor of Jazz at HKB Bern Switzerland.

This article uses material from the article Django Bates from the free encyclopedia Wikipedia and it is licensed under the GNU Free Documentation License.