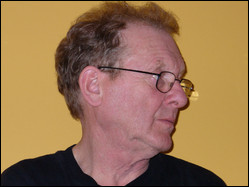 Phil Minton (b. 2 November 1940, Torquay, United Kingdom) is a jazz/free-improvising vocalist and trumpeter.

Minton is a highly dramatic baritone who tends to specialize in literary texts: he has sung lyrics by William Blake with Mike Westbrook's group, Daniil Kharms and Joseph Brodsky with Simon Nabatov, and extracts from James Joyce's Finnegans Wake with his own ensemble. He even once participated in a Jimi Hendrix tribute project, belting out the lyrics in particular over-the-top fashion. Between 1987 and 1993 Minton toured Europe, North America and Russia with Lindsay Cooper's Oh Moscow ensemble.[1][2]

He is perhaps best known, however, for his completely free-form work, which involves "extended techniques" that are extremely unsettling. His vocals often include the sounds of retching, burping, screaming, and gasping, as well as childlike muttering, whining, crying and humming; he also has an ability to distort his vocal cords to produce two notes at once. As the DJ/poet Kenneth Goldsmith has described it:[3]

Minton's most frequent improvising companions are the pianist Veryan Weston and the drummer Roger Turner, but over the years he has worked with most of the improvising musicians in the European scene. Unlike some first-generation free improvisers, he has also become a frequent participant in the so-called electroacoustic improvisation (EAI) scene.

Since 1965 Minton has performed on over a hundred different vinyl record and CD releases.

Phil Minton as part of the Mike Westbrook Band

This article uses material from the article Phil Minton from the free encyclopedia Wikipedia and it is licensed under the GNU Free Documentation License.

Swans The Night Is Still Young
Update Required To play the media you will need to either update your browser to a recent version or update your Flash plugin.