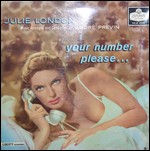 Julie London (born Julie Peck,[1] Gayle Peck[2] or Nancy Peck (sources differ); September 26, 1926 – October 18, 2000) was an American singer and actress, whose career spanned over forty years. She was noted for her smoky voice and languid vocal style. She released 32 albums of pop and jazz standards during the 1950s and 1960s, with her signature song being "Cry Me a River", which she introduced in 1955. She also appeared as a guest on several talk shows and as a panelist on game shows.

London's 35-year acting career began in movies in 1944, and included roles co-starring with Rock Hudson in The Fat Man (1951), with Gary Cooper in Man of the West (1958) and with Robert Mitchum in The Wonderful Country (1959). She achieved continuing success in the 1970s television show Emergency! (1972–79), in which she appeared with her husband, Bobby Troup. The show was produced by her ex-husband, Jack Webb. London played the role of Nurse Dixie McCall, her last acting role.

An only child,[3] Julie London was born on September 26, 1926, in Santa Rosa, California, the daughter of Josephine (née Taylor; 1905 – 1976) and Jack Peck (1901 – 1977), who were a vaudeville song-and-dance team.[4] At one time, her mother worked in a pharmacy. In 1929, when she was three years old, her family moved to San Bernardino, California, where she made her professional singing debut on her parents' radio program.[5] In 1941, when she was 14, her family moved to Hollywood, California. Shortly after that, she began appearing in films. She graduated from the Hollywood Professional School in 1945.

London began singing under the name Gayle Peck in her teens. She was discovered by talent agent Sue Carol (wife of actor Alan Ladd), while working as an elevator operator. Her early film career did not include any singing parts.

London recorded 32 albums in a career that began in 1955 with a live performance at the 881 Club in Los Angeles.[6] Billboard named her the most popular female vocalist for 1955, 1956, and 1957. She was the subject of a 1957 Life cover article in which she was quoted as saying, "It's only a thimbleful of a voice, and I have to use it close to the microphone. But it is a kind of oversmoked voice, and it automatically sounds intimate."[7]

London's debut recordings were for the Bethlehem Records label. While searching for a record deal, she recorded four tracks which would later be included on the album Bethlehem's Girlfriends in 1955. Bobby Troup was one of the session musicians on the album. London recorded the standards "Don't Worry About Me", "Motherless Child", "A Foggy Day", and "You're Blasé".

London's most famous single, "Cry Me a River", was written by her high-school classmate Arthur Hamilton and produced by Troup.[8] The recording became a million-seller after its release in December 1955,[9] and also sold on reissue in April 1983 from the attention brought by a Mari Wilson cover. London performed the song in the film The Girl Can't Help It (1956), and her recording gained later attention in the films Passion of Mind (2000) and V for Vendetta (2006). Her cover of the Ohio Express song "Yummy Yummy Yummy" was featured on the HBO television series Six Feet Under and appears on its soundtrack album. London's "Must Be Catchin'" was featured in the 2011 premiere episode of the ABC series Pan Am. Her last recording was "My Funny Valentine" for the soundtrack of the Burt Reynolds film Sharky's Machine (1981).

Though primarily remembered as a singer, London also made more than 20 films and she was a pin-up girl prized by GIs during World War II. In 1956 she played herself in the Jane Mansfield movie The Girl Can't help It, appearing as a mirage, singing two or three sultry songs. One of her strongest performances came in Man of the West (1958), starring Gary Cooper and directed by Anthony Mann, in which her character, the film's only woman, is abused and humiliated by an outlaw gang.[10]

She remained close with ex-husband Jack Webb, and in 1972 he cast London and Troup in his TV series Emergency!, on which he was executive producer. London played Rampart General Hospital's Chief Emergency Room Nurse Dixie McCall, while Troup was cast as emergency room physician Dr. Joe Early. They also appeared in the same roles in an episode of the Webb-produced series Adam-12.

The on-screen friendship between London, Troup, Randolph Mantooth and Kevin Tighe, who played paramedics Johnny Gage and Roy DeSoto, carried over into real-life. London maintained her friendship with Mantooth and Tighe after the series ended.[13]

In 1977, after a six-year run of 128 episodes, Emergency! was cancelled, despite good ratings. London, the only actress to appear in every episode of the series, was invited back for two of the four subsequent TV movie specials, before the show finally ended in 1979. Later, Webb offered London a position as executive producer of future TV projects, but she chose to retire from active TV work to spend more time with her family.

In 1947, London married actor Jack Webb (of Dragnet fame). Their relationship was based partly on their common love of jazz.[14] They had two daughters, Stacy and Lisa Webb. London and Webb divorced in 1954. Daughter Stacy Webb died in a traffic accident in 1996.[1]

In 1959, London married jazz composer and musician Bobby Troup and they remained married until his death in 1999. They had one daughter, Kelly Troup, who died in 2002, and twin sons, Jody and Reese Troup. Jody Troup died in 2010.[15][16] London was also the stepmother of Cynthia and Ronne Troup, Bobby's daughters from his marriage to Cynthia Hare.

Julie London was a private, reserved woman,[17][18] who was also a chain smoker from the age of 16. She suffered a stroke in 1995 and was in poor health for five years. She died in the early morning hours of October 18, 2000, in Encino, California, age 74.[19][20][21] London was buried next to Troup in the Courts of Remembrance Columbarium of Providence, at Forest Lawn-Hollywood Hills Cemetery in Los Angeles, California.[22] Her star on the Hollywood Walk of Fame (for recording) is at 7000 Hollywood Boulevard in Los Angeles.

This article uses material from the article Julie London from the free encyclopedia Wikipedia and it is licensed under the GNU Free Documentation License.