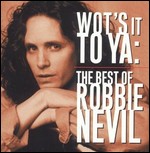 Nevil began playing guitar at age eleven and played in a series of cover bands. He began performing his original music and signed a publishing deal in 1983, writing songs for the Pointer Sisters, El DeBarge, and Earth, Wind & Fire.

In 1986, he obtained his first recording contract, signing with Manhattan Records, for whom he recorded his debut album with the producers Alex Sadkin and Phil Thornalley. His debut single "C'est La Vie" reached #2 on the Billboard Hot 100, propelling the album into the Top 40 on both the US pop and Billboard R&B chart.[1] His second single "Dominoes" hit #14 on the Hot 100 and #22 on the Hot Dance Music/Club Play chart, while the third single "Wot's It To Ya" peaked at #10 on the Hot 100 and Dance Club/Play charts, and #69 on the R&B chart.[2]

Nevil turned to writing and producing for acts such as Babyface, Jessica Simpson and Destiny's Child.[3] In 2006, he collaborated with Matthew Gerrard on the Smash Mouth album Summer Girl. Gerrard had been writing for Disney for some time and their work led to a partnership working on Disney projects including The Cheetah Girls, High School Musical, and Hannah Montana franchises.

Robbie Nevil is brother to the actor Alex Nevil.

This article uses material from the article Robbie Nevil from the free encyclopedia Wikipedia and it is licensed under the GNU Free Documentation License.