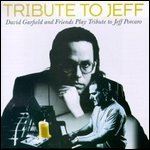 Jeffrey Thomas Porcaro (April 1, 1954 – August 5, 1992) was an American drummer, songwriter, and record producer. In a career that spanned more than 20 years, Porcaro was best known for his work with the rock band Toto. Porcaro is one of the most recorded session musicians in history,[1] working on hundreds of albums and thousands of sessions.[2] While already an established studio player in the 1970s, he came to prominence in the United States as the drummer on the Steely Dan album Katy Lied. AllMusic has characterized him as "arguably the most highly regarded studio drummer in rock from the mid-'70s to the early '90s", further stating that "It is no exaggeration to say that the sound of mainstream pop/rock drumming in the 1980s was, to a large extent, the sound of Jeff Porcaro."[2] He was posthumously inducted into the Modern Drummer Hall of Fame in 1993.[3]

Jeffrey Thomas Porcaro was born on April 1, 1954, in Hartford, Connecticut, the eldest son of Los Angeles session percussionist Joe Porcaro and his wife, Eileen. His brothers Mike and Steve were also successful studio musicians and members of the band Toto. Porcaro was raised in the San Fernando Valley area of Los Angeles and attended Ulysses S. Grant High School.

Porcaro began playing drums at the age of seven. Lessons came from his father Joe Porcaro, followed by further studies with Bob Zimmitti and Richie Lepore.

When he was seventeen, Porcaro got his first professional gig playing in Sonny & Cher's touring band. He later called Jim Keltner and Jim Gordon his idols at that time.[4] During his 20s, he played on hundreds of albums,[5] including several for Steely Dan. He toured with Boz Scaggs before co-founding Toto with his brother Steve and childhood friends Steve Lukather and David Paich. Jeff Porcaro is renowned among drummers for the drum pattern he used on the Grammy Award winning Toto song "Rosanna", from the album Toto IV.[6] The drum pattern called the Half-Time Shuffle Groove, was originally created by the legendary drummer Bernard Purdie who called it the "Purdie Shuffle." Porcaro created his own version of this groove by blending the aforementioned shuffle with John Bonham's groove heard in the Led Zeppelin song "Fool in the Rain". Porcaro describes this groove in detail on a Star Licks video (now DVD) he created shortly after “Rosanna” became popular.

Richard Marx dedicated the song "One Man" to him and said Porcaro was the best drummer he had ever worked with.[7] Michael Jackson made a dedication to Porcaro in the liner notes for his 1995 album HIStory: Past, Present and Future, Book I.

Porcaro died on August 5, 1992, at the age of 38. He had fallen ill after spraying insecticide in the yard of his Hidden Hills home and died that evening at Humana Hospital-West Hills. According to one Los Angeles Times report, the Los Angeles County Coroner's office listed the cause of death to be a heart attack from atherosclerosis induced by cocaine use,[8] not from an allergic reaction to the pesticides as presumed immediately after his death and stated by Toto in the band's official history.[9] Porcaro's family, friends, and Toto band members have disputed the assertion that cocaine use contributed to his death, claiming that while he occasionally consumed the drug, he was not a heavy user or addict.[10] In a 2013 interview, Steve Lukather reiterated this belief, blaming Porcaro's death at least partially on a family history of heart problems and denying statements that cocaine had directly played a role:[11]

Steve Lukather: I spoke to him the day he passed... He said, 'Yeah, man, I'll see you this weekend, and we'll have a BBQ at the house, and we'll go clean up the yard,' and that's when he got poison on himself, and it turns out he had a bad heart, anyway. He had two uncles that died when they were 40 years old from heart disease, so it was genetic. This whole drug thing that came out, it's so insidious, and I hate the fucking fact cause he was never the bad drug guy. He'd be the guy going, "What are you guys doing, staying up all night, you idiots?!" In the late '70s and early '80s, it was crazy, man ― we're not gonna deny any of it ― but by the time he passed, it was never... I don't know, people just love to roam the dirty laundry as Henley wrote, you know, and you read this Wikipedia shit, that's right there, it's like, 'Does anybody ever do homework on these facts?' He just had a genetic predisposition. This whole thing with his arms hurting and all this, he was always, 'My arms, my muscles.' It wasn't his muscles. It was the fact that the blood was not getting to the extremities. He had hardening of the arteries at 38 years old.

Interviewer: How long was he complaining of the pain in the arms?

Steve Lukather: Years. It was debilitating to the point where touring became difficult for him.

Porcaro's funeral was held on August 10 in the Forest Lawn – Hollywood Hills Cemetery, where he was buried on the Lincoln Terrace, lot 120.[12] The Jeff Porcaro Memorial Fund was established to benefit the music and art departments of Grant High School in Los Angeles, California, where he was a student in the early 1970s. A memorial concert took place at the Universal Amphitheater in Los Angeles on December 14, 1992, with an all-star line-up that included George Harrison, Boz Scaggs, Donald Fagen, Don Henley, Michael McDonald, David Crosby, Eddie Van Halen, and the members of Toto. The proceeds of the concert were used to establish an education trust fund for Porcaro's sons.

Porcaro's tombstone was inscribed with the following epitaph, comprising lyrics from Kingdom of Desire track "Wings of Time": "Our love doesn't end here; it lives forever, on the Wings of Time."

Porcaro endorsed Pearl drums,[13] pedals, racks and hardware, Paiste cymbals, Remo drumheads and Regaltip drumsticks. He had his own Regaltip Jeff Porcaro signature drumsticks, which are still made by the company as of 2018. He used other brands of drums until joining Pearl in 1982, notably Ludwig-Musser, Gretsch, Camco, and Yamaha Drums.

This article uses material from the article Jeff Porcaro from the free encyclopedia Wikipedia and it is licensed under the GNU Free Documentation License.

Move Away Culture Club
Update Required To play the media you will need to either update your browser to a recent version or update your Flash plugin.