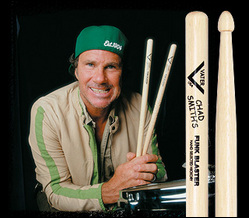 Chadwick Gaylord "Chad" Smith (born October 25, 1961[1][2][3]) is an American musician, and current drummer of Red Hot Chili Peppers, whom he joined in 1988 and is a member of the Rock and Roll Hall of Fame with. Smith was also the drummer of the hard rock band Chickenfoot and currently the all-instrumental outfit Chad Smith's Bombastic Meatbats. As one of the most highly sought-after drummers, Smith has recorded with Deep Purple vocalist Glenn Hughes, Kid Rock, Jake Bugg, The Dixie Chicks, Jennifer Nettles, Johnny Cash, John Fogerty and The Avett Brothers, to name a few.

Widely regarded as one of rock music's best drummers, Spin Magazine placed Smith at #10 on their list of the 100 Greatest Drummers of Alternative Music in May 2013.[4] Readers of UK-based Rhythm magazine ranked Smith and Red Hot Chili Pepper bassist Flea the fourth-greatest rhythm section of all time in their June 2013 issue.[5]

Smith was born on October 25, 1961, in Saint Paul, Minnesota, but spent most of his childhood in Bloomfield Hills, Michigan. He spent his early years in various rock bands including Michigan based band, Toby Redd before deciding to head out to California.

In 1988, the Red Hot Chili Peppers were looking for a replacement for their drummer, D.H. Peligro who was recently fired. Already into the process of working on their fourth studio album and hiring new guitarist, John Frusciante, the band held open auditions for a new drummer. Smith was one of the last drummers to audition for the band and right away the band felt just by looks alone, Smith would be the wrong fit however the band was blown away by his audition and singer Anthony Kiedis admired Smith and found his persistence pretty impressive.[6] Smith joined the Chili Peppers in December 1988 and within a few months was recording his first album with the band, Mother's Milk. Smith reflected on joining the band in a 2012 interview by saying I remember thinking, Oh, cool, they have a record deal. Great! Id love to be in a band that has a record deal. We started playing, and right away we just hit it off musically. I was like, Man, this is a blast! These guys are great! We were just doing what we do. We just jammed, which is what we still do today. Its very similar.[7]

After a successful world-wide tour in support of Mother's Milk the band released their major label debut, 1991's Blood Sugar Sex Magik which was hugely successful upon its release peaking at number three on the Billboard charts, and went on to sell thirteen million copies worldwide. It went on to be nominated and win several awards and is highly regarded as one of the best albums of all-time. Shortly into the tour for the album, Frusciante quit the band in 1992 and was replaced by Arik Marshall for the remainder of the tour. Marshall was fired following the tour and briefly replaced by Jesse Tobias who was let go in favor of Dave Navarro in 1994. With Navarro intact, the band would release 1995's One Hot Minute. Navarro too would end up being fired in 1998 following the tour to support the album and replaced with a returning John Frusciante. With Frusciante back, the band released 1999's Californication, their biggest selling album to date. That album was followed by 2002's By the Way and 2006's Stadium Arcadium, the band's first number one album in the United States.

In 2007, Smith, along with fellow Glenn Hughes alumni, guitarist Jeff Kollman and keyboardist Ed Roth, formed an all-instrumental band inspired by their shared love of 1970s funk and fusion. Still unnamed at the time, the group, rounded out by bassist Kevin Chown, debuted at the 2008 NAMM show in Anaheim, California. The band has released two studio albums and a double live disc as Chad Smith's Bombastic Meatbats since its inception.[8]

Following a lengthy world tour in support of Stadium Arcadium, the Chili Peppers decided to take a break in 2008. During this break, Smith joined the hard rock supergroup Chickenfoot, whose other members are Sammy Hagar, Joe Satriani and Michael Anthony. The group has released two studio albums and a live album to date. Smith was also a judge for the 7th annual Independent Music Awards to support independent artists' careers that same year. The Chili Peppers re-grouped in 2009 after a year-long hiatus to record new music however Frusciante again had quit and was now replaced with Josh Klinghoffer.

Smith released 2010's Rhythm Train, a critically acclaimed children's album which he recorded with Dick Van Dyke and Leslie Bixler.[9] In April 2010, MTV named Rhythm Train one of the best children's records of all time.

The Chili Peppers released I'm with You, their tenth studio album, Smith's seventh with the band in 2011. Due to touring commitments with the Chili Peppers, Smith was unable to tour with Chickenfoot and was replaced by Kenny Aronoff. Smith released The Chad Smith Drum App in March 2012, which is free mobile application for iPhone, iPad and Android devices and features his "Drummer GPS". The GPS section of the app spotlights drummers Smith has been influenced by and those he regards as some of the best drummers around today. The Chad Smith Drum App has received great praise from both fans and from fellow drummers..

In April 2012, the Chili Peppers were inducted by Chris Rock into the Rock and Roll Hall of Fame. A month later, Smith rejoined Chickenfoot for a four-song encore at the Orpheum in Boston, Massachusetts. Smith and the Chili Peppers wrapped up I'm With You World Tour in April 2013. That same month, Smith was asked by NAMM, the National Association of Music Merchants, to represent the music community by going to Washington, D.C. as a lobbyist in support of music education in US public schools. While in DC, Smith had the opportunity to meet with congressional leaders and share his experience as a student who learned his craft entirely within the public school system. Smith has since been invited back to lobby in April 2014 in support of public school music education.

In May 2013, Smith launched In Conversation with Chad Smith, his own podcast through MusicRadar where he interviews other musical artists.[10]

Smith joined Sammy Hagar in the studio to work on music for his twelfth studio album. They were joined by guitarist Neal Schon and bassist Michael Anthony and according to Hagar it was the rebirth of his 1980s band HSAS, which featured Schon and two other members.[11]

The Chili Peppers launched another lengthy tour in May 2013 and it is expected to keep them on the road until June 2014. During this time, the band appeared alongside Bruno Mars at the halftime for the Super Bowl in February 2014. Smith confirmed that the Chili Peppers would begin work on their eleventh studio album that same month.

Smith is married to architect Nancy Mack, with whom he has three children. In addition, Smith has a daughter from a previous marriage and two other children.

He is an active supporter of a number of non-profit organizations including Surfer's Healing, SeriousFun Network, MusiCares, Silverlake Conservatory of Music, Guitar Mash NY and Camp Korey.

He is also known for his strong resemblance to actor and comedian Will Ferrell, which he has capitalized on by wearing shirts reading "I Am Not Will Ferrell" in live performances. Smith said that the two first met during the premiere of the film, The Ladies Man. "I'm looking at Will and thinking, People really think I look like him? I don't fucking look like that. He looks me up and down and says, 'You're very handsome,' and walks away. Totally deadpan. I was like, 'You're funny. You're funny.'"

In February 2014, through Funny or Die, Smith called out Ferrell during his reddit fan interview blasting his drumming skills by saying "I've seen your skills. You don't got 'em. Mr. Ferrell is a delusional imposter. It seems to me that he has gone off his meds and he needs to seek professional help because I am obviously more talented and handsome than he is. You know, his cowbell work is well-documented, but his drumset skills are nominal based on Step Brothers the film. Other than wiping his testicles on the drums, which of course I give high marks to. Ferrell actually responded during Smith's interview saying "Hi, Chad. Will Ferrell here. I saw your video and I graciously accept your invitation to a drum battle. If we can raise $300,000 for Cancer for College I will face off with you in the greatest drum vs. cowbell showdown the world has ever seen. We can do it on stage at a Red Hot Chili Peppers concert or in front of a mutually convenient public library. Your call. Also, would you rather fight a hundred duck sized ducks or one horse sized horse?" Smith replied to Ferrell saying "Tell Will Ferrell anytime, anyplace, I'll take him down. I don't want to embarrass him, but I'd say don't bring your family. Especially children. I don't want them to see this." Smith followed it up by tweeting a picture of himself giving blood with the caption, "Gettin juiced for the drum battle."[12][13] Ferrell set up a website where you can donate to Cancer for College to make the drum battle a reality.[14]

This article uses material from the article Chad Smith from the free encyclopedia Wikipedia and it is licensed under the GNU Free Documentation License.

Free (I Wish I Knew How It Would..) Lighthouse Family
Update Required To play the media you will need to either update your browser to a recent version or update your Flash plugin.