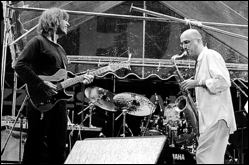 Steps Ahead (originally known as Steps) is a jazz fusion group and the brainchild of vibraphonist Mike Mainieri. According to the liner notes of the group's 1983 debut album (for worldwide release), entitled Steps Ahead, "Steps began as a part-time venture in 1979 at Seventh Avenue South, a New York City nightclub." The group began releasing recordings in Japan as far back as 1980.

The first line-up of Steps in the period 1979-1981, as can be read on the live album Smokin' in the Pit, consisted of Michael Brecker (tenor sax), Steve Gadd (drums), Eddie Gomez (bass), Don Grolnick (piano), Mike Mainieri (vibraphone), and special guest Kazumi Watanabe (guitar). This double live album was recorded on 15 and 16 December 1979 at The Pit Inn Tokyo. A second studio recording was made on 17 December 1979, called Step by Step. Smokin' in the Pit was released in 1980 and awarded a gold record. The studio album Step by Step was released shortly after, followed in the summer of 1980 by another live recording called Paradox. These three albums (see Mike Mainieri's notes in the booklet of the 1999 cd release of Smokin' in the Pit) were the only albums released by the group under the name of Steps. In 1982 they learned that the name Steps had been trademarked by a band in North Carolina, and therefore changed their name to Steps Ahead.

Brecker and Mainieri are featured on the Dire Straits album Brothers in Arms. For rock listeners, the albums Steps Ahead and Modern Times (1984, with Bernhardt replacing Elias in the main line-up, and other guest musicians appearing in limited roles) are a great bridge into a kind of jazz that is energetic and powerful. Reflecting the cooperative, ensemble nature of the band, the Modern Times album included compositions by Mainieri, Brecker, Erskine, and Bernhardt.

According to the website NYC Records, which include's Mainieri's biographical sketch and touring schedule with Steps Ahead, the 2007 instantiation of Steps Ahead includes: Mainieri (vibes), Bill Evans (sax; not to be confused with the jazz pianist also named Bill Evans), Bryan Baker (guitar), Anthony Jackson (bass), and Steve Smith (drums), a former member of the rock group Journey. On some stops of the tour, Etienne Mbappe is listed as filling in for Jackson.

This article uses material from the article Steps Ahead from the free encyclopedia Wikipedia and it is licensed under the GNU Free Documentation License.

Tiptoes Caroline Chevin
Update Required To play the media you will need to either update your browser to a recent version or update your Flash plugin.