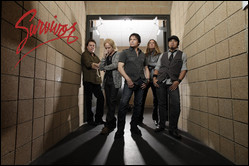 The band tweaked its musical direction in 1988 with the release of the slightly heavier Too Hot to Sleep, but the album barely reached the Billboard 200 in the United States. Because of this, the band split. Singer Jimi Jamison later toured as 'Survivor' in the mid-1990s, to the chagrin of the rest of the band. Jamison re-united with the band's other members in 2000 and the band released Reach in 2006, but Jamison left the band after its release and was replaced by Robin McAuley. The band was continuing to tour with McAuley into 2011.

An announcement on November 13 2011 by Robin McAuley on his Facebook page revealed he left Survivor. A further announcement on 18th November confirmed that Jimi Jamison rejoined the band and was making plans to tour in 2012.

Founding Survivor members Jim Peterik, Gary Smith and Dennis Keith Johnson initially came together in 1977 as The Jim Peterik Band after Peterik had released an album, Don't Fight the Feeling, on Epic Records the previous year. On the liner notes of the album, Peterik is referred to as a "survivor." Smith and Johnson had both been members of Bill Chase's jazz-rock fusion band Chase, and Peterik had worked with Bill Chase in 1974. Then in 1978, at the urging of tour manager Rick Weigand, Peterik hooked up with Frankie Sullivan, brought in singer Dave Bickler and Survivor was born. Peterik was previously the lead vocalistguitarist for the band The Ides of March.[1] After playing in small clubs for several years, Survivor was signed by Atlantic Records A&R executive John Kalodner.[2] The group's first album, the self-titled Survivor, was released on the Atlantic subsidiary Scotti Bros. in early 1980, but the album produced no Top 40 singles, and did not achieve the level of success that the band had hoped for.

In 1981 Johnson and Smith had schedule conflicts with their other projects, so they were replaced by Stephan Ellis and Marc Droubay in time for the recording of the band's follow-up album, Premonition. It charted higher, achieving popularity with American audiences and giving the band its first Top 40 single, "Poor Man's Son." The album also showed off Bickler's range as a vocalist with its second single, "Summer Nights."

In 1982 Survivor's breakthrough arrived when actor Sylvester Stallone asked them to provide the theme song for his movie Rocky III. Stallone had heard their single "Poor Man's Son" and wanted a song similar to it.[3] The band agreed to write him a song and soon released "Eye of the Tiger". The new song featured a faster tempo while still incorporating the stylish, nearly identical power chords. It had an enormous impact on the Billboard charts, peaking at #1 and remaining there for a total of six weeks. It also topped the British charts. It was in the Top 40 for a total of 18 weeks and was Australia's #1 single for four weeks.[4] The song won the band a Grammy Award, was voted "Best New Song" by the People's Choice Awards, and also received an Academy Award nomination.[4] The album of the same title, Eye of the Tiger, was released by the band later in 1982 and contained another Top 40 hit in the United States, "American Heartbeat" (#17 US). The album went on to chart at #2 in the United States.

In 1983 Survivor tried to duplicate the success of Eye Of The Tiger with their next release Caught in the Game. The album turned out to be a commercial disappointment, stalling at #82 on the Billboard 200 in the United States. The album's only single, the title track, peaked at #77. The band suffered another setback in late 1983 when lead singer Dave Bickler suffered voice problems and was forced to leave. In early 1984 he was replaced by Jimi Jamison of the bands Target and Cobra.

During pre-production of their seventh album, Too Hot to Sleep (1988), Ellis and Droubay were replaced by studio session vets Mickey Curry (drums) and Bill Syniar (bass). Sullivan produced the effort with Frank Fillipetti. Though the album presented a harder-rocking Survivor, similar to the sound in the band's early days, Too Hot to Sleep failed to make a dent on the charts (#187 US). There were, reportedly, a few live dates done by the band during this period (including a stint as opening act for Cheap Trick on "The Flame" Tour of North America) that included Syniar on bass and Kyle Woodring on drums.

After the disappointing sales of Too Hot to Sleep, Jim Peterik and Frankie Sullivan decided to put the band on hiatus indefinitely. Jamison decided to continue touring and playing Survivor songs with local musicians. He subsequently recorded a solo album in 1991. Jamison continued to tour, now billing his band as 'Survivor' or 'Jimi Jamison's Survivor'. After some success touring overseas in 1992, Sullivan contacted Jamison's management and asked to be included on the tour; he performed on eight to ten dates before leaving the group. Soon after, in late 1992early 1993, Survivor was tapped to do a new and more extensive hits package with two new songs. For a short time Peterik, Sullivan, and Jamison were reunited in the studio to record new material for the new package and forthcoming world tour. After broken contract talks, Jamison quit and went back on the road again as 'Jimi Jamison's Survivor'.

In spring 1993 Peterik and Sullivan re-teamed with original lead singer Dave Bickler, released a new 'Greatest Hits' album with two new songs ("Hungry Years" co-written by Bickler and "You Know Who You Are") and embarked on a world tour with Bill Syniar and Kyle Woodring returning on bass and drums. Klem Hayes took over on bass later in 1993 after Syniar departed. As Jamison was also touring under the Survivor banner, Peterik and Sullivan filed a lawsuit against their former colleague for using the name.

From 1993 to 1996 the trio (Peterik, Sullivan, and Bickler) recorded about 20 demos for a new album (the songs can be heard on the Fire Makes Steel bootleg) with session musicians. They failed to secure a record deal due to the ongoing litigation and trademark issues. In 1994 Hayes departed and the bass chair was filled, first by Randy Riley (1994-1995), then by Billy Ozzello (1995-1996).

When the band tried to move in a blues direction, Peterik decided to leave the band, playing his last show with Survivor on July 3, 1996 at 'The Eye in the Sky' fest in Lisle, Illinois. Survivor replaced Peterik with composerkeyboardist Chris Grove. Peterik returned to recording and touring with The Ides of March and also formed the group Pride of Lions. In the fall of 1996 bassist Stephan Ellis and drummer Marc Droubay rejoined Survivor but Ellis quit again by early 1999 and was replaced by Gordon Patriarca who only played about a half a dozen shows before Billy Ozzello was brought back. Survivor then went on to record more demos for a record deal, including "Rebel Girl '98" and the Frankie Sullivan solo album cut, "Lies".

In 1999 Jimi Jamison released the album Empires under the name "Jimi Jamison's Survivor" (later re-released under his own name). In late September 1999 Sullivan won ownership of the name "Survivor", thereby ending the ongoing trademark battle.

In early 2000, Bickler was fired, severing the then SullivanBickler Survivor and resulting in Sullivan's reestablishment of a partnership with Jamison. The band then began recording material for a new album. The PeterikSullivan-penned track "Velocitized" was set for inclusion on the soundtrack to the Sylvester Stallone film Driven. However, it did not make the cut. Later that year, the band threatened to sue CBS for using the name "Survivor" as the title of their hit reality show Survivor.

In 2004 a Starbucks television commercial debuted for their Double Shot espresso beverage. It featured the band following a man named Glen, singing a modified version of "Eye of the Tiger" while he did his day-to-day tasks. This commercial has gained a number of fans and was nominated for an Emmy Award.[5] Meanwhile, original Survivor vocalist David Bickler began collaborating on the successful Bud Light Real Men of Genius radio ads in the late 1990s and 2000s. The "Real Men of Genius" Bud Light ads are widely popular and include TV spots aired on the 2006 Super Bowl, among others. A CD package containing many of the popular commercials was recorded with Bickler selling over 100,000 copies in its first month of release.

Barry Dunaway took over on bass on tour in 2005. But by early 2006 Billy Ozzello was back again. In April 2006 Survivor released a new album called Reach. Consisting of mostly new songs, it also included some re-recordings from the "Fire Makes Steel" sessions. Two of the album's songs, "Reach" and "Fire Makes Steel", had been considered for inclusion in the 2006 Rocky sequel Rocky Balboa but were not included, nor did they appear on the 2006 album Rocky Balboa: The Best Of Rocky. Six of the album's other songs were originally written and recorded in the 1990s with Dave Bickler on lead vocals.

On July 14, 2006 it was announced that Jamison was leaving the band and that Robin McAuley would replace him on lead vocals.

The band performed "Eye Of The Tiger" on ABC's Dancing with the Stars on April 3, 2007. And on October 10, 2008, "Eye" was used to introduce Republican Vice Presidential candidate and Alaskan Governor Sarah Palin at a rally in west-central Ohio.

According to Frankie Sullivan, and revealed at Survivormusic.com on March 5, 2010, an album of new original music, titled Re-Entry, was to be released the following month, but this never came to pass. As of 2010, the lineup was a mix of old and new members: Robin McAuley (vocals), original member/songwriter Frankie Sullivan (guitar/vocals), longtime members Marc Droubay (drums) and Billy Ozzello (bass) and newcomer Mitchell Sigman (keyboards/guitar), who replaced Michael Young.

Frankie Sullivan produced the second album of the critically acclaimed band Mecca, led by singersongwriter Joe Vana. Coincidentally, he replaced Jim Peterik who produced the first Mecca album. The album was released in the second half of 2010 on Frontiers Records.

This article uses material from the article Survivor (band) from the free encyclopedia Wikipedia and it is licensed under the GNU Free Documentation License.

Spotlight Jennifer Hudson
Update Required To play the media you will need to either update your browser to a recent version or update your Flash plugin.