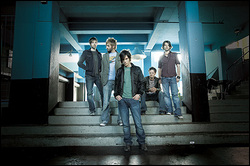 The Lovebugs are a Swiss Britpop inspired band from Basel, Switzerland founded in 1992. They are one of Switzerland's most successful bands with three number one albums in the Swiss charts.[1]

Lovebugs was founded in 1992 by Adrian Sieber, Sebastian "Baschi" Hausmann and Julie Lauper, after Adrian placed an ad in a music shop: Drummer Wanted. They won a local talent contest which enabled them to record their first album. One year later, the drummer, Julie, left the band and was replaced by Simon Ramseier.

In 1995 they went on their first tour which included shows around Europe. Their second album, Tart, was released the same year.

In 1996 they got their first breakthrough when their single "Fantastic" reached number 40 in the Swiss charts. They signed to BMG Ariola.

In 1998 an additional guitarist, Thomas Riechberger, joined the band.

In 2000 they had another major break-through with the album Transatlantic Flight, which reached number 3 in the Swiss album charts. It was their first release under Warner Music label. This was followed by Awaydays, which was the band's first number 1 album. The single "Music Makes My World Go Round" reached number 6. Bassist Sebastian left the band to dedicate himself to the glam-rock project 'Fucking Beautiful. He was replaced by Florian Senn. At the same time, Stefan Wagner joined the band on keyboards.

After a short break, Lovebugs were back in 2003 with the album 13 Songs With A View which contained the singles "A Love Like Tides" and "'72". The album was not as successful as the two earlier albums and only reached number 7 in the Swiss charts. The next album, Naked, was a live and unplugged album. It was their second number 1 album. It was produced by Chris von Rohr, former member of fellow Swiss band Krokus.

After 2006, Lovebugs took a break, partly for recovery and partly because the singer Adrian Sieber wanted to carry out a long-planned solo career under the name Adrian Solo.

In 2009, Lovebugs were chosen to represent Switzerland at the Eurovision Song Contest in Moscow, Russia. They presented the song "The Highest Heights", but did not qualify for the finals even though they were considered favourites and were confident during the rehearsals. They ended up 14th in the first semi-final held on Tuesday, 12 May 2009, out of 18 contestants.[2] They had some sound problems during the Eurovision and Sieber later said in an interview that Lovebugs were primarily a live band, and weren't used to all the cameras.

This article uses material from the article Lovebugs (band) from the free encyclopedia Wikipedia and it is licensed under the GNU Free Documentation License.

Slip Slidin' Away Paul Simon
Update Required To play the media you will need to either update your browser to a recent version or update your Flash plugin.