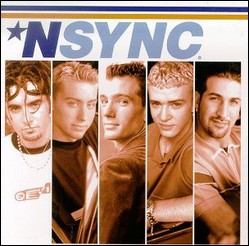 Although 'N Sync announced the start of a "temporary hiatus" in spring 2002, the band has not recorded new material since. The group's official website was shut down in the summer of 2006, and in 2007, Lance Bass confirmed that the group has "definitely broken up."[4] They have sold over 50 million albums during their career.[5]

Chris Kirkpatrick, who had missed the cut for the Backstreet Boys, met with Lou Pearlman in 1995 to talk about forming a second group.[6] Pearlman said that he would finance the group if Kirkpatrick would find other young male singers. This prompted Kirkpatrick to call Joey Fatone, a friend he had met while working at Universal Studios. Then, Fatone and Kirkpatrick approached Lou Pearlman for more suggestions. Pearlman looked through some tapes they had, and one of Justin Timberlake from the Mickey Mouse Club caught his eye. Timberlake soon joined the group and recommended his friend JC Chasez, who also was a cast member on the Mickey Mouse Club. Soon, they decided to even out their sound by recruiting Jason Galasso as their bass singer.

'N Sync received its name after Justin Timberlake's mother commented on how "in sync" the group's singing voices were.[7] The group's name is also a play on the last letter of each of the original members' names: JustiN, ChriS, JoeY, JasoN, and JC.[8]

After several weeks of rehearsals, the group set up a showcase and began planning to officially sign with Pearlman's Trans Continental Label. However, at the last minute, Galasso dropped out. He was not fond of the group's musical direction, claiming that being a teen idol was never a goal of his.[9] In need of a bass, the group auditioned several people without success. Timberlake soon called his vocal coach, who suggested a 16-year-old from Mississippi named Lance Bass. Bass flew to Orlando to audition and was immediately accepted into the group. He was nicknamed "Lansten" so they could keep the name 'NSYNC.[10]

From there, Pearlman set the five boys up in a house in Orlando, Florida, where they rehearsed constantly, learning dance routines and vocal parts, and working on promotion for their first public performance at Pleasure Island on October 22, 1995. Pearlman hired Johnny Wright, manager of the Backstreet Boys, to manage the group. 'N Sync sent him a two-song demo-tape including "I'll Be Back for More" and "We Can Work It Out", which impressed him. The group performed for him and a group of BMG executives. Although the record company had some concerns with the band's name and Bass's dancing abilities, they agreed to sign the group to BMG Ariola Munich with Wright as their manager.[11]

After being signed to BMG Ariola Munich, the group was sent to Sweden to begin working on their debut album with the help of producers such as Denniz Pop, Max Martin and Andreas Carlsson. The album's official lead single, "I Want You Back", was released in Germany on October 7, 1996, and entered the top 10 in Germany on November 18, 1996.[12] With a record deal finally secured, the boys began touring first in German-speaking countries and later in other European territories. Their self-titled debut album was initially released by BMG Ariola Munich on May 26, 1997, in Germany, and peaked at number one in the second week after its release.[13] The group soon became an overnight success throughout much of Europe.[14] The album also charted successfully in both Switzerland and Austria eventually selling 820,000 units in GSA (Germany, Switzerland, Austria) region and Eastern Europe.[15][16] The group released its second and the third singles, "Tearin' Up My Heart" and "Here We Go", both of which managed to reach the top-10 in numerous countries in Europe.[17][18] 'N Sync captured the attention of Vincent DeGiorgio, an A&R rep for RCA Records. After seeing the group perform in Budapest, he eventually signed them to RCA in 1998. The American label had the group record some new tracks to adjust their album for the U.S. market.

The group released its first American single, "I Want You Back" on January 20, 1998. It reached No. 13 on the Billboard Hot 100. An album called *NSYNC followed on March 24, 1998. Album sales were sluggish, debuting at No. 82 on the Billboard 200, but were helped when The Disney Channel aired a concert special on July 18, 1998. The concert was first offered to the Backstreet Boys, but they had to back out due to member Brian Littrell needing heart surgery.[19] Three weeks before the concert, the album sat at No. 85 on the albums chart; three weeks after the concert, the album reached number nine. The group's profile continued the rise with subsequent single release "Tearin' Up My Heart", which became hit on pop radio and one of the "100 Greatest Songs of the 90's" according to VH1. Regular touring, including an opening spot on Janet Jackson's The Velvet Rope Tour, and television spots on shows like Sabrina, the Teenage Witch also bolstered sales for the album, which was eventually certified diamond for shipments in excess of 10 million units.[20]

On November 10, 1998, the group released a holiday album, Home for Christmas. The album peaked at No. 7 and sold 2 million copies.[20] With this, 'N Sync achieved the rare feat of having two albums in the Billboard Top 10 at the same time. The group scored its first top 10 on the Hot 100 with their third single, "God Must Have Spent A Little More Time on You", which peaked at No. 8 in February 1999. Country group Alabama later re-recorded the song and released it as a single that featured vocals from 'N Sync. The fourth and final single from the album, "I Drive Myself Crazy", was a modest chart hit, but a mainstay on Total Request Live. In September 1999, the group collaborated with Gloria Estefan on a song for the soundtrack for her movie Music of the Heart. The track "Music of My Heart" reached No. 2 on Billboard's Top-100 single chart and served as a stopgap between album releases.

In 1998, 'N Sync entered a publicized legal battle with Lou Pearlman, due to what the group believed were illicit business practices on his part.[21] 'N Sync sued Pearlman and his record company, Trans Continental, for defrauding the group of more than fifty percent of their earnings, rather than his promise of only receiving one-sixth of the profits.[21] The group threatened to leave and sign with Jive Records, which prompted Pearlman and RCA to countersue 'N Sync for US$150 million and the use of the name.[22] Pearlman's request for a preliminary injunction against the band was denied.[21] After reaching a settlement out of court,[23] 'N Sync signed with Jive.[24]

2000-2001: Groundbreaking success and No Strings Attached

With their legal woes behind them, 'N Sync refocused and worked on tracks for its second album. In January 2000, the group released "Bye Bye Bye", an upbeat dance track, which shot into the top 5 of the Hot 100 and spent 5 weeks atop the Hot 100 Airplay chart. The song is often considered the group's signature song. They performed at the Latin Grammy show in 2001 singing the Spanish version of their song "This I Promise You", "Yo Te Voy Amar."

The second single, "It's Gonna Be Me", became the group's first No. 1 single in the U.S. The third and final single, "This I Promise You" reached the Top-5 on Billboard's Top-100 single chart. The group also embarked on a World No Strings Attached Tour that year. The adventures of preparing for the tour were featured on an MTV special "Making the Tour", which was later released on DVD. The tour was then featured on a HBO special, which aired the same week the group's song "It's Gonna Be Me" hit No. 1 on the charts. The group then went on the second leg of the tour in the fall and performed one last show in 2001 for the "Rock in Rio" concert. The group also released Live From Madison Square Garden, a home video release of its HBO Special.

The group's third album, Celebrity, released on July 24, 2001, produced three singles: "Pop" (#19 U.S.), "Gone" (#11 U.S.) and "Girlfriend" (#5 U.S.). The album featured much more creative involvement from the group, especially Chasez and Timberlake, who wrote and produced several of the tracks. The album was also notably more heavily influenced by hip-hop than the group's previous releases. As such, rapper Nelly contributed a verse to a remix of the single "Girlfriend". The album was generally well-received, but album sales were substantially less than previous releases.

To help support the Celebrity album, the group embarked on a four-month stadium tour entitled the PopOdyssey Tour. The outing began in May, two months before the CD's release. Over two million fans attended the concerts. The success of the tour prompted the group to extend the tour and add 33 extra shows that was called the "Celebrity Tour". A video of the concert was later released on home video, Pop Odyssey Live.

In April 2002, after the group's Celebrity tour, the group went into hiatus. They were slated to begin work on a new album in the fall of 2003,[28] but these plans never materialized. The group still attended award shows and events together, and regrouped at the 2003 Grammy Awards to sing a televised Bee Gees medley in tribute to that band.[29] They also performed "The Star Spangled Banner" at the 2004 *NSYNC Challenge for Children.[30] In 2005, the members regrouped again for the last *NSYNC Challenge for the Children, but did not perform.[31] In the fall of 2005, 'N Sync released a greatest hits album. It included one song, "I'll Never Stop", that had previously not been released in the US. In January 2010, the band released another album, The Collection, consisting of singles released only in the UK.

There was no farewell tour or press release about a breakup from the band. Since their hiatus was announced, the only indication of a split came from Bass's 2007 autobiography, Out of Sync, where he believed that 'N Sync was finished and has cited Timberlake's desire for a solo career as the main reason behind this. Since their last public appearance together, the question on whether a reunion would take place had come up many times during individual interviews, which resulted in mixed opinions between all five members.

On August 25, 2013, the members of 'N Sync regrouped for a one-off performance at the 2013 MTV Video Music Awards. They performed a medley of "Gone", "Girlfriend" and "Bye Bye Bye" during Timberlake's 15 minute set leading up to his acceptance of the Michael Jackson Video Vanguard Award. Their introduction included non-vocal elements of "Gone" in the background.[32] After the performance, Lance Bass said that the group does not have any plans at the moment for a reunion tour or new music.[33]

The members licensed their likenesses on a great variety of merchandise, including board games, microphones, lip balm, marionettes, books, key chains, bedding, clothing, video games,[34] and various other articles. The group was immortalized in wax in Madame Tussauds New York wax museum in 2009; all five members of 'N Sync were present the day of the unveiling. The group also had a deal alongside McDonald's, which included commercials featuring the group and Britney Spears, along with a CD and a video that featured behind-the-scenes footage from the making of 'N Sync's music video. The vocal group also had a deal with Chili's Grill & Bar in which the members appeared in commercials for the restaurant, while Chili's helped sponsor the group's tour.

This article uses material from the article 'N Sync from the free encyclopedia Wikipedia and it is licensed under the GNU Free Documentation License.

Sail The Sea Adam's Wedding
Update Required To play the media you will need to either update your browser to a recent version or update your Flash plugin.