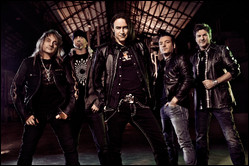 Gotthard is a Swiss hard rock/heavy metal band founded in Lugano by Steve Lee and Leo Leoni. Their last eleven albums have all reached number 1 in the Swiss album charts, making them one of the most successful Swiss acts ever.[1] With 2 million albums sold, they managed to get multi-platinum awards in different parts of the world. The band takes its name from the Saint-Gotthard Massif.

On November 11, 2011, Gotthard announced a new singer, Nic Maeder, through their official Facebook page and their website with their new song "Remember It's Me", downloadable for free.

In December 2012, Gotthard have concluded the Firebirth Tour, in support of their 10th studio album.

Their new disc titled "BANG!", the bands 11th studio release (2nd with Nic Maeder) will be released 4th of April 2014, according to the band's official website.

Gotthard also performed "Immigrant Song" (originally by Led Zeppelin) live and it featured exclusively on a CD by Classic Rock (a long running monthly UK rock magazine). "Hush" was also performed live and can be found on the Made In Switzerland and "D frosted" albums.

They have also covered songs from Bob Dylan, The Hollies, Manfred Mann and The Move.

In 2008, Gotthard was supporting act for one of their favourite bands Deep Purple, during Deep Purple's German Tour. They also played at the Magic Circle Music Festival alongside bands such as Manowar, Alice Cooper, Doro and W.A.S.P. in Bad Arolsen, Germany.

Gotthard also opened up for US rock band Bon Jovi in Switzerland, Germany and Italy and for Canadian rock act Bryan Adams.

On Oct. 5th 2010, Steve Lee died in a crash while driving his motorbike in the United States.[2]

"The world has lost one of its greatest rock singers: GOTTHARD frontman Steve Lee was killed accidentally during a motorcycle trip in the USA on Interstate 15 between Mesquite and Las Vegas and died at the scene.

"The GOTTHARD singer had flown to the U.S. with some biker friends just this weekend to fulfill a long-cherished dream for which he'd never had the time due to his heavy touring schedule for many years. It was to be two weeks through the States on a Harley-Davidson.

"The 21 Swiss bikers started their journey on Sunday on a total of 12 motorcycles. On Tuesday, October 5, about 50 miles from Las Vegas, the group had stopped at the roadside to put on their rain gear as it had started to rain. On the slippery road, the trailer of a passing truck began to skid. The driver attempted evasive action but his trailer clipped five of the motorcycles parked at the roadside; one of them hit Steve Lee. Rescue services attempted resuscitation but efforts were stopped after 20 minutes. At 16:13 local time, Steve Lee was pronounced dead.[5]

This article uses material from the article Gotthard (band) from the free encyclopedia Wikipedia and it is licensed under the GNU Free Documentation License.