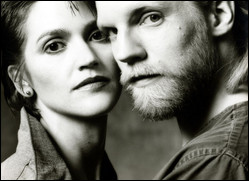 Boy Meets Girl is an American duo consisting of keyboardist and vocalist George Merrill and singer Shannon Rubicam. They are perhaps best known for their hit song "Waiting for a Star to Fall" from 1988 and for writing the songs two number one hits "How Will I Know" and "I Wanna Dance With Somebody (Who Loves Me)" performed by Whitney Houston.

The members of Boy Meets Girl, George Merrill and Shannon Rubicam, wrote and composed a number of songs for other artists. Most famous are their two number one hits written for Whitney Houston, "How Will I Know" and "I Wanna Dance With Somebody (Who Loves Me)". They also wrote the songs "Don't Tell Me We Have Nothing" and "Haunting Me" for Deniece Williams and the song "I Know You By Heart", which Bette Midler performed on the Beaches soundtrack. The duo also performed backing vocals on Deniece Williams's number one hit, "Let's Hear It For The Boy". Merrill also sang backing vocals on Bette Midler's Some People's Lives album.

Despite writing and composing songs for other artists, Boy Meets Girl usually produces a demo version, or, in some such cases as that of "Don't Tell Me We Have Nothing", a studio version, before Merrill and Rubicam hand the song to the intended artist.

The duo's first album was self-titled, and its lead-off song, "Oh Girl", a bitter tale of a failed relationship was released as a single by A&M Records. The song reached #39 on the Billboard Hot 100 singles chart in May 1985. The Boy Meets Girl album peaked at #76 on the album charts.

Three years later, the group released their follow-up album, Reel Life, which featured the single "Waiting for a Star to Fall". With this selection, after years of writing and composing songs for other artists, the duo earned mainstream success in their own right. In the United States, "Waiting For a Star to Fall" peaked at #5 on the Billboard Hot 100 and at #1 on the Billboard Adult Contemporary chart.[1] The song reached #9 in the UK[2] and was also a top ten Australian hit in April 1989. It was featured in the movie Three Men and a Little Lady. Reportedly, the song was inspired by an actual falling star that Merrill and Rubicam had seen at one of Whitney Houston's concerts at the Greek Theatre. The duo submitted the song to Houston for consideration on her next album, but she rejected it. The song was also recorded by Belinda Carlisle for her 1987 release Heaven On Earth at the insistence of her label. But Carlisle disliked the song, and she ultimately refused to include it on the album, though it has circulated in her trading circles for years on a disc of that album's outtakes.

Boy Meets Girl's follow-up single, "Bring Down the Moon", peaked at #49 on the Billboard Hot 100 (and #28 Adult Contemporary).[1] The Reel Life album contained both singles and spent several weeks at #50 in the United States[3] and peaked at #74 in the United Kingdom.[2]

Boy Meets Girl's third album, New Dream, was scheduled for release in 1990, but RCA Records shelved it during a label reorganization. It was finally released through the band's own website in 2004.

In the early-2000s, the couple divorced, but continued their musical collaboration. In 2003, they released their fourth album, The Wonderground, on their own label, and arranged for RCA Records to re-release their two RCA albums. Their debut album recorded for A&M Records was also re-released. In the works are new versions of the demonstration tapes they originally recorded for Whitney Houston. The various artists album Number One With a Bullet also contains their original demo tape for "I Wanna Dance With Somebody (Who Loves Me)".

In 2005, "Waiting For a Star to Fall" was involved in a "sample battle". Two electronic music groups, Cabin Crew and Sunset Strippers, wanted to sample the song and remix it to become a hit again. Sunset Strippers, from the UK, won the right for the samples from the band's record label, releasing "Falling Stars". However, Cabin Crew, from Australia, had met Boy Meets Girl, and vocalist George Merrill re-recorded the vocals for the remixed song, entitled "Star To Fall" or "Star2Fall". In the same year, Scottish electronic musician Mylo had also used samples of the song, mixing it with Kim Carnes's cover of "Bette Davis Eyes", for his song entitled "In My Arms".

This article uses material from the article Boy Meets Girl (band) from the free encyclopedia Wikipedia and it is licensed under the GNU Free Documentation License.

I'm Finished Here Philipp Fankhauser
Update Required To play the media you will need to either update your browser to a recent version or update your Flash plugin.