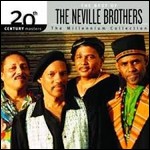 The Neville Brothers is an American R&B/soul/funk group, formed in 1977 in New Orleans, Louisiana.

Art Neville reached out to Paul Howrilla (personal manager for Dr. John) and told him that he always wanted to do something with his brothers. Paul Howrilla created Neville Productions, Inc., serving as president and CEO with all four Neville brothers as members of the board of directors. The newly formed business covered the entire Neville family, designed to protect them from the music business abuse they had previously endured in their individual careers.

This experience led them to form the group the following year. Their debut album was released from Capitol Records in 1978.

In 1988, the group released Uptown from EMI featuring guests including Branford Marsalis, Keith Richards, and Carlos Santana. The following year saw the release of Yellow Moon from A&M Records produced by Daniel Lanois. The track "Healing Chant" from that album won best pop instrumental performance of the Grammy Awards.[1]

In 1990, the Neville Brothers contributed "In the Still of the Night" to the AIDS benefit album Red Hot + Blue produced by the Red Hot Organization. Also in 1990, they appeared on the bill at that year's Glastonbury Festival.[2] This also was the year they recorded "Sons and Daughters" on their Brother's Keeper album.

Due to the health problems of Art Neville, the band kept low profile in the late 1990s onto the early 2000s. They made a comeback in 2004, however, with the album, Walkin' In The Shadow Of Life, from Back Porch Records, their first newly recorded effort in five years.

All brothers except Charles, a Massachusetts resident, had been living in New Orleans, but following Hurricane Katrina in 2005 Cyril and Aaron moved out of the city. They had not been performing in New Orleans since Katrina hit the city, however, they finally returned to perform there at the New Orleans Jazz & Heritage Festival in 2008, being given the closing spot which had been reserved for them for years.[3][4]

Infrequently, Ivan Neville, Aaron's son (keyboards) and Ian Neville, Art's son (electric guitar), both of the band Dumpstaphunk, have played with the band in recent years.

The group formally disbanded in 2012 but reunited in 2015 for a farewell concert in New Orleans. [5]

This article uses material from the article The Neville Brothers from the free encyclopedia Wikipedia and it is licensed under the GNU Free Documentation License.

Someday I'll Be Saturday Night Bon Jovi
Update Required To play the media you will need to either update your browser to a recent version or update your Flash plugin.