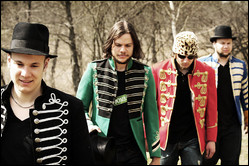 77 Bombay Street is a Swiss folk rock musical group that was formed in 2008 in Scharans, canton Graubünden.[1] It consists of four brothers Matt, Joe, Simri-Ramon and Esra Buchli. The band was named after their temporary home in Adelaide, Australia, where the whole Buchli family lived for two years. As of 2014, the band had released three studio albums, the first called Dead Bird self-released, the other two Up in the Sky and Oko Town in association with Gadget Records.

Both Up in the Sky (2011) and Oko Town (2012) went platinum in Switzerland, the former peaking at the third place, the latter hitting the top of Schweizer Hitparade, the official Swiss Albums Chart.[2] According to their official Facebook site, the band is currently working on their fourth studio album.[3] In an interview Matt Buchli said "Yes, we are busy writing new songs and we’ve got a feeling it will be fantastic! Every album is a new and great challenge."[4]

In 2012 the band won two Swiss Music Awards with album Up in the Sky and its title track "Up in the Sky" for Best Album Pop/Rock National and Best Hit National, respectively.[5] In 2015, the band is currently working on their fourth studio album, which has been released in fall 2015.[6]

This article uses material from the article 77 Bombay Street from the free encyclopedia Wikipedia and it is licensed under the GNU Free Documentation License.

Don't Stay Away Nicole Bernegger
Update Required To play the media you will need to either update your browser to a recent version or update your Flash plugin.