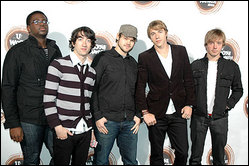 Plain White T's (read as "plain white tees") are an American rock band from Lombard, Illinois, formed in 1997 by high school friends Tom Higgenson, Dave Tirio and Ken Fletcher. They were joined a short time later by Steve Mast. The group had a mostly underground following in Chicago basements, clubs and bars in its early years.[6][7]

The band is best known in the U.S. for the number-one hit song "Hey There Delilah", which achieved platinum status in 2007 and earned two Grammy nominations,[8] as well as "1234" and "Rhythm of Love", which were certified platinum in 2009 and 2011.

The Plain White T's was formed in Lombard in early 1997. The group began as a trio, with Higgenson as singer and guitarist, Fletcher on bass guitar and Tirio on drums.[9][10] The group played mostly local punk shows in Chicago's suburbs, eventually having gigs at the Metro in Chicago's Wrigleyville neighborhood. As the band began to establish itself in the local scene, a fourth member was recruited, Steve Mast, who joined playing lead guitar and sang backing vocals.[11]

Higgenson broke several vertebrae in a car crash in 1999[12] while driving the band's van. He was in a back brace for three months and had to learn to walk again. Higgenson changed his songwriting process, choosing songs that were more meaningful to him, and the band began taking its music career more seriously.[13]

In 2000, the band recorded its first album, titled Come on Over. In 2002, the band self-financed the recording of Stop, a full-length album that attracted the attention of Fearless Records. While the band toured in support for the album, both Fletcher and Mast left and were replaced by Tim Lopez and Mike Retondo. Shortly after in 2003, Tirio decided to switch from drumming to rhythm guitar and a new drummer named De'Mar Hamilton was added to the line-up.

In 2008, the group released the album Big Bad World. The album had two hit singles: "1, 2, 3, 4" and "Natural Disaster". Both were on the American Top 40 at numbers 1 and 2 for three consecutive weeks.[18] By late 2008, the band had joined the Rock Band Live tour with Panic! at the Disco, Dashboard Confessional and The Cab.[19] Later that year, the band played at the Give It a Name festival in the UK.[20] In 2007, the band performed the single "Our Time Now" on an episode of the Nickelodeon television series, iCarly. "Our Time Now" was also the theme song of the ABC Family dramedy series, Greek.[21]

The band's "Rhythm of Love" single was the first to be released from the group's 2010 album, The Wonders of the Younger. The song reached number five on the Hot AC chart, and was in the top ten in 2010 as well.[18] In 2012, the band also covered The Ramones' "Pet Sematary" for the song soundtrack of the 2012 Disney film Frankenweenie.[22] Should've Gone to Bed, a four-song EP, was released on April 9, 2013.

Side project and American Nights (2013–present)

In 2013, Higgenson and Tirio formed a side project called That Lying Bitch to return to the group's punk rock roots.[23]

The band left Hollywood Records after creative conflicts with the label during the production of the American Nights album.[24] American Nights was released by Megaforce Records on March 31, 2015. The release date of American Nights was pushed back several times by their former record label, Hollywood Records. Lead singer Tom Higgenson revealed to the media that the reshuffle of top-management in his record company was partly the reason. Now that they have left the company, they confessed it is a better way to do music and they benefit more from having more leeway to focus on what they care, throwing off the shackle of the contract with the label company. [25]

In 2015, they also appeared on Blues Traveler's album Blow Up the Moon, co-writing the song "Nikkia's Prom." On November 22, 2015, the band released a music video for "American Nights" featuring Higgenson's son, Lennon.[26]

In May 2017, Plain White T's released a music video for their song "Land of the Living." [27] The band, which had left their label Fearless in 2005, returned to the label. As of April 2017, The band have said that they are currently writing new music.[28]

The band performed "Hey There Delilah" at the 2017 Alternative Press Music Awards.[29]

The following list includes a selection of television appearances made by the band and performances used by those and other shows:[31]

This article uses material from the article Plain White T's from the free encyclopedia Wikipedia and it is licensed under the GNU Free Documentation License.

Skate Silk Sonic
Update Required To play the media you will need to either update your browser to a recent version or update your Flash plugin.