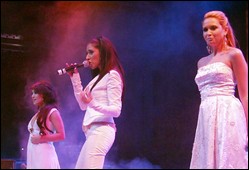 Monrose is an Comet Award winning all-female pop band, first established in 2006. Formed on the fifth installment of the German version of the international television talent show Popstars, the trio is composed of singers and songwriters Mandy Capristo, Senna Guemmour, and Bahar Kzl. As of 2009, they have sold more than a million records worldwide.[1]

The band's debut album Temptation was released in December 2006, and achieved major success throughout Central Europe, selling more than a 600,000 copies combined,[2] while spawning two singles with number-one hit "Shame" and the ballad "Even Heaven Cries." Their second studio album, Strictly Physical, was released in September 2007 following the release of their second chart-topper "Hot Summer," and has since been certified double gold.[3] The group's third studio album I Am was released in October 2008.[4]

Under the motto "Neue Engel braucht das Land" ("The country needs new angels"), Popstars returned with a fifth installment in August 2006, this time searching for the legal successors of the show's first and most successful formation, the No Angels. More than 5,100 hopeful female singers attended open television auditions in Frankfurt, Stuttgart, Hanover, Munich. and Dortmund, judged by choreographer and dancer Detlef "D!" Soost, music producer Dieter Falk, and singer Nina Hagen. Over the course of several recalls and re-recalls the three judges reduced the contestants to a group of 20 who immediately travelled to Ischgl, Tyrol, to get trained in singing, dancing, and fitness. In the end 11 girls remained who again moved into a mansion in Pullach, Munich, to start working on their performance and publicity skills. While Soost, Falk, and Hagen continued eliminating one or two girls each week, the six remaining finalists went on with the recordings of alternative versions of their debut album Temptation and the video shoot for their first single "Shame."

On the season's finale on November 23, 2006, three of the six were chosen to make the band: Mandy Capristo, Senna Guemmour, and Bahar Kzl beat out Arjeta Zuta, Katarzyna Zinkiewicz, and Romina Reinhardt - and eventually formed the trio Monrose.

On December 1, 2006, Monrose released their debut single "Shame". The Jiant & Snowflakers-produced pop song became an instant success and reached number one in Austria, Germany, and Switzerland, making it one of the most successful debuts of the year.[5] Outselling 3/4 of the German Top 100's singles sales combined, the song also emerged as the fastest selling CD single of 2006 and the biggest-downloaded song since the introduction of the legal digital download charts in Germany in 2004.[5] The band's debut album, Temptation was released on December 8 in all German-speaking countries. Popstars judge Dieter Falk, Toni Cottura, Marc Mozart, and Marcus Brosch consulted on the album which debuted on top of the Austrian, German and Swiss albums charts and was certified platinum by the IFPI for more than 200,000 copies sold within its first two weeks of release.[6] It eventually sold more than 600,000 copies domestically.[2] Critics rated Temptation generally positively, with laut.de's Stefan Johannesburg praising Monrose and their team for wisely finding a very "British and catchy" musical middle ground between the Pussycat Dolls and Destiny's Child.[7]

In January 2007, it was announced that the trio had qualified for the German national pre-selection of the Eurovision Song Contest 2007, organized and broadcasted by the ARD.[8] Following several weeks of promotional appearances, Monrose entered the competition on March 8, 2007 with their second single "Even Heaven Cries," and although considered as early favourites by the media,[8] the band received 20 per cent of all 900,000 phone votes only and eventually finished second,[9] falling against swing singer Roger Cicero and his song "Frauen regier'n die Welt." Meanwhile "Even Heaven Cries" peaked at number 6 on the German Singles Chart and within the top 20 in Austria and Switzerland. Following this, the band announced their Venus Temptation Tour with twenty dates, beginning at the Hanover Capitol on April 29, 2007. Sponsored by Global Gillette, the concert tour was accompanied by intense media coverage since it failed to produce any sold-out show, and thus four concerts had to be cancelled due to low ticket sales.[10][11]

While touring Monrose began preparing work on their second studio album, Strictly Physical which was preceded by "Hot Summer," the band's second number-one hit in Austria, Germany and Switzerland and one of the biggest-selling songs of the year on German online music stores.[12] Obtaining international success in Scandinavia, Eastern Europe and the Benelux states, the single confirmed the trio's intentions to expand their career on foreign language markets and as a result Strictly Physical received a simultaneous release in most of Continental Europe on September 21, 2007.[13] Featuring main production by Danish producers Remee and Thomas Troelsen, the album earned mixed reviews, with most professional critics calling the longplayer a "more mature and individual" but "well-snitched" output in comparison with band's debut album.[14] With "Strictly Physical" and the Billymann-penned ballad "What You Don't Know" the album spawned another two top 10 entries.

On September 1, Monrose contested in the Sopot Song Festival 2007 in Poland, representing Germany with their debut single "Shame." Rivaled by other international artists such as Sophie Ellis-Bextor, Thierry Amiel, The Cloud Room and September, the trio eventually lost to Polish rock band Feel and their song "A gdy ju jest ciemno."

Main article: I Am (Monrose album)

On March 20, 2008, Monrose' non-album song "We Love," a promotional song for German-based network ProSieben, was released as a digital download single. The trio's third studio album, entitled I Am, was released on September 26, 2008 in German-speaking Europe, involving production by Ryan Tedder, Jiant, and Snowflakers among others.[4] Taking Monrose's work further into dance and electro music, the album scored a generally negative reception from music critics, with laut.de calling them "the new Sugababes for discount store-fans."[15] Upon its release, the album became the band's lowest-charting effort to date, reaching the top ten of the German Albums Chart only. The album's leading single, Tedder-penned "Strike the Match," was released on June 6, 2008 and reached number ten of the German Singles Chart. Follow-up singles "Hit'n'Run" and "Why Not Us" ended the run of the band's consecutive top ten entries in Germany with peak positions of number 16 and number 27, respectively.[16]

Also in 2008, the band contributed vocals to a cover version of singer Craig David's 2000 number-one hit "Walking Away." Although David and the band shot the video in London, England in July 2008, the single release of the re-recording was eventually scrapped.[17]

This article uses material from the article Monrose from the free encyclopedia Wikipedia and it is licensed under the GNU Free Documentation License.