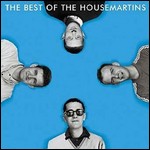 The Housemartins were an English alternative rock band formed in Hull who were active in the 1980s.[1] Many of the Housemartins' lyrics were a mixture of Marxist politics and Christianity, reflecting singer Paul Heaton's beliefs at the time (the back cover of London 0 Hull 4 contained the message, "Take Jesus – Take Marx – Take Hope"). The group's a cappella cover version of "Caravan of Love" (originally by Isley-Jasper-Isley) was a UK Number 1 single in December 1986.

After breaking up in 1988, Heaton and fellow band members Dave Hemingway and Sean Welch went on to form The Beautiful South, while bassist Norman Cook would turn to electronic music, founding the groups Beats International and Freak Power and would later rebrand himself as Fat Boy Slim, and go on to great success as a DJ and music producer under that name.

The band was formed in late 1983 by Paul Heaton (vocals) and Stan Cullimore (guitar), initially as a busking duo. Throughout his tenure with the band, Heaton billed himself as "P.d. Heaton".

Heaton and Cullimore recorded a demo tape with Ingo Dewsnap and Sharon Green of Les Zeiga Fleurs which brought them to the attention of Go! Discs. They then expanded by recruiting Ted Key (bass), former guitarist with The Gargoyles. Their first live performance as a band was at Hull University in October 1984.[2] The band's membership changed considerably over the years. Key left at the end of 1985 and was replaced by Norman Cook (the future Fatboy Slim). Drummer Chris Lang was replaced by Hugh Whitaker, former drummer with The Gargoyles, who in turn was replaced with Dave Hemingway.[1][3]

The band often referred to themselves as "the fourth best band in Hull". The three bands that were "better" were Red Guitars, Everything but the Girl and The Gargoyles.[1]

In 1986, having recorded two John Peel sessions, the band broke through with the single "Happy Hour", which reached No. 3 in the UK Singles Chart.[4] The single's success was helped by a claymation animated pop promo of a type that was in vogue at the time, featuring a cameo by television comedian Phill Jupitus, who toured with the band under his stage name of "Porky the Poet".

At the end of 1986 they had their only UK No. 1 single on 16 December with a cover version of Isley-Jasper-Isley's "Caravan of Love".[1] It was knocked off the top spot by Jackie Wilson's "Reet Petite" on 23 December, denying the Housemartins the coveted Christmas No. 1 single.

The a cappella style of "Caravan of Love" was not to the taste of all Housemartins' fans, although a cappella material had always been part of the band's repertoire. "Caravan of Love" was first performed by the band in their second Peel session in April 1986, prior to their initial chart success. At Peel's suggestion, the band then recorded another session (under the name The Fish City Five), consisting entirely of a cappella performances, and on at least one occasion (at The Tower nightclub in Hull, the same concert at which they were filmed as the Housemartins for the BBC programme, Rock Around the Clock), played support act for their own performance under this alternative name. The "Caravan of Love" single featured four a cappella gospel songs on the B-side.

The band split in 1988, but the members have remained friends and have worked on each other's projects. Norman Cook has enjoyed significant success with Beats International and then as Fatboy Slim, while Heaton, Hemingway and roadie Sean Welch formed The Beautiful South.

In August 2009, Mojo magazine arranged for The Housemartins' original members to get together for a photo-shoot and interview, for the first time in many years, but in the interview all the members maintained that the band would not re-form.

In December 2009, Cullimore co-wrote songs for (and appeared in) a pre-school music series called The Bopps, which first showed on Nick Jr. in the UK in April 2010.

Cullimore and Whitaker joined Heaton on stage during a show by Heaton and Jacqui Abbott in 2014 at Hull's legendary The New Adelphi Club, on the stage where the band had signed their Go-Discs record contract, although it was not a Housemartins reunion. The trio performed the Housemartins hit "Me and the Farmer", and Cullimore and Heaton closed the show with a performance of "Caravan of Love".[5]

London 0 Hull 4 was re-released on 22 June 2009, with a bonus disc featuring tracks released as additional content on 12-inch singles and demo tracks.

The band's early releases saw them described as jangle pop, which brought comparisons with bands such as The Smiths and Aztec Camera.[6][7] David Quantick, writing for Spin, described them in 1986 as playing "traditional '60s-style guitar pop overlaid with soul vocals".[8] Cook described the band as "religious, but not Christians", and the band's repertoire included Gospel songs.[6][8]

Many of the band's lyrics have socialist themes, with Cook stating that "Paul realized that he hated writing about love...and that writing politically came easier to him", describing some of their songs as "angrily political".[8][9]

(does not include "live" appearances on TV programmes)

This article uses material from the article The Housemartins from the free encyclopedia Wikipedia and it is licensed under the GNU Free Documentation License.

One More Time James Ingram
Update Required To play the media you will need to either update your browser to a recent version or update your Flash plugin.