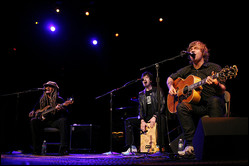 Nada Surf is an American alternative rock band which consists of Matthew Caws (guitar, vocals), Ira Elliot (drums, backup vocals), Doug Gillard (lead guitar) and Daniel Lorca (bass, backup vocals). Based in New York and formed in the 1990s, Nada Surf continues to tour, and their most recent studio album, The Stars Are Indifferent To Astronomy, was released in 2012.

In 1992, the band was formed by Matthew Caws and Daniel Lorca. Concerning the band's name, Matthew said, "it's actually referring to something much more existential, it's just surfing on nothing. Being lost in your head or in your imagination but you know, whenever I listen to music I always find myself off somewhere. Somewhere in space. You know, in mental space and it's a reference to that."[1] They met in the Lycée français de New York; both spent some of their childhood in France and Belgium, and played in many bands, including The Cost of Living and Because Because Because. Their first drummer, Dan (later alluded to in the song "The Plan" from the album High/Low), was replaced by Aaron Conte, with whom the band recorded its first 7", The Plan/Telescope (1994/Stickboy), as well as the demo tape Tafkans, the raw version of High/Low. Those raw versions were later released on their second 7", Deeper Well/Pressure Free (1995/Deep Elm Records), on the Karmic EP and on North 6th Street.

In 1995, Conte left the band and was replaced by Ira Elliot, former drummer of the Fuzztones, a very active band of the eighties NYC scene, and of whom both Caws and Lorca were fans. After a show at the Knitting Factory, Nada Surf met former Cars frontman and Weezer producer Ric Ocasek. With little hope, they presented him with a copy of Tafkans. Three weeks later, Ocasek called back with news of his intention to produce the band's album. At the same time, the band was finalizing a contract with Elektra Records, through an executive, Terry Tolkin, who was working for its indie branch, No.6 Records, on which their release, the Karmic EP had been released the same year. Negotiations with Elektra did not pan out, so Ocasek connected the band with Maverick Records. The band flew to Los Angeles for a hectic audition; Caws had the flu, and they had to rent gear.[2]

In 1996, the band released High/Low, their debut album which was recorded and mastered within a 19-day period. The recording was paid for by Elektra before the band signed its contract that January. That summer, as Nada Surf toured the United States with Superdrag, their song "Popular" became a summer anthem, and the band toured overseas.

In 1998, the band released The Proximity Effect, their follow-up album, in Europe. Produced by Fred Maher, the album gained little commercial success in the US. Their record label, thinking the album lacked a hit like "Popular", had the band record several covers, including "Black & White" (The dBs) and "Why Are You So Mean To Me?" (Vitreous Humor), to use as singles. Tired of the requirements of the A&R director, the band judged the album was perfect as-is (even though Elektra suggested the inclusion of an acoustic version of "Popular"), and broke their contract. As a consequence, Elektra did not release the album in the US and dropped the band while they were on a promotional tour in Europe. Despite these events, this album was critically acclaimed in France, where the band made a 30-show tour the following year.[3]

In 2000, the band released The Proximity Effect in the United States on their own label, MarDev (named after Caws' maternal grandmother, Margaret Devereux Lippitt, daughter of the painter Margaret Walthour Lippitt), after being dropped by Elektra. Following the album's release, the band performed at their record release party at Luna Lounge in New York City and toured intensively for several months to rebuild their North American fan base.

From 1999 to 2002, the band took regular day jobs: Caws worked at a Brooklyn record store called Earwax,[4] Lorca worked on some computer projects and Elliot did drum and guitar session work for other artists. Caws later referred to these times as a period of luxury, and the record store job as his favorite job ever."[5]

In 2002, the band released Let Go, a critically acclaimed album[6] which included the successful single, "Inside of Love", and toured for this album for several months, including many European festivals in the summer of 2003. Mostly recorded the year before, the album was produced by their friends Louie Lino and Chris Fudurich, who had engineered The Proximity Effect; the band paid them with $1 and $5 bills, the money earned from tour merchandise sales.

In 2005, the band released The Weight Is a Gift on Barsuk Records, an album produced by Chris Walla (among others), and finished touring for this album in October of the following year.[7] The record was made during a month spent at John Vanderslices Tiny Telephone studio in San Francisco.[8]

In 2008, the band released Lucky, an album with producer John Goodmanson in the Robert Lang Studios in Seattle, from material recorded the year before. That same year, the band's song, "No Quick Fix", was featured as the Spinner MP3 of the Day, and they were featured on the cover of Beyond Race magazine for the publication's winter issue.

In 2010, the band released If I Had A Hi-Fi, an album of covers including songs by the likes of Depeche Mode, Kate Bush, Spoon (band), and The Go-Betweens.[9] Milwaukee noise rock band IfIHadAHiFi reciprocally titled their next album Nada Surf EP+3.[10]

In 2012, the band released The Stars Are Indifferent To Astronomy, an album which included the single "Waiting for Something" and introduced former Guided By Voices guitarist Doug Gillard as fourth band member.[11][12]

Prior to the release of the full record, Nada Surf recorded The Dulcitone Files EP, a digital collection featuring acoustic performances of five songs from The Stars Are Indifferent To Astronomy. The EP was recorded by Caws in England.

This article uses material from the article Nada Surf from the free encyclopedia Wikipedia and it is licensed under the GNU Free Documentation License.

Keep Me Running Andy McSean
Update Required To play the media you will need to either update your browser to a recent version or update your Flash plugin.