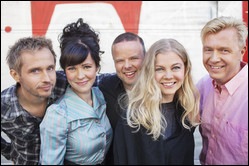 The group's members compose or arrange most of the songs that they perform. A large portion of the group's recorded songs are sung in English, with the remainder being almost entirely in Swedish. The group cites Bobby McFerrin as an early source of inspiration: "What we do may never have happened if we hadn't heard his [albums].".[1]

The Real Group has performed in more than 2000 concerts worldwide.[2] In 2002 The Real Group performed at the opening ceremony of The FIFA World Cup in Seoul. They performed live to the audience of 60,000. On December 22, 1993, to commemorate the fiftieth birthday of Queen Silvia of Sweden, The Real Group backed up former ABBA member Anni-Frid Lyngstad in a performance of the ABBA hit "Dancing Queen", using an a cappella arrangement that would later be released on the album "Varför får man inte bara vara som man är".

The Real Group was formed in 1984, when its original members were students at the Swedish Royal College of Music. Margareta Bengtson had been the Soprano with the group since its inception but broke off from the group to work on her solo albums at the end of 2006. Johanna Nyström filled her spot for some time, until Emma Nilsdotter replaced her in 2008, and had her first appearance with the group in Kremlin Palace.[3] Johanna Nyström has also filled in for both Margareta Bengtson and Katarina Henryson whenever they have been on maternity leave or otherwise away. Morten Vinther Sørensen recently joined the group to replace Peder Karlsson, who has since shifted his focus to developing The Real Academy.

Vocal ranges of the members

This article uses material from the article The Real Group from the free encyclopedia Wikipedia and it is licensed under the GNU Free Documentation License.

Until Now Tiffen
Update Required To play the media you will need to either update your browser to a recent version or update your Flash plugin.