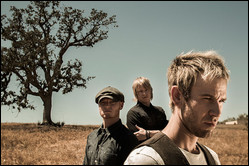 The band came to mainstream prominence in 2001 with the hit single "Hanging by a Moment" from their debut studio album, No Name Face.[1][2] The song was #1 for three weeks on the Billboard Modern Rock Tracks chart and peaked at #2 on the Billboard Hot 100 charts, and the single won a Billboard Music Award for Hot 100 Single of the Year, having spent twenty weeks in the top 10 and more than a year on the charts.[3][4]

In 2002, Lifehouse released their follow-up album Stanley Climbfall. Since then, they have released four more albums: the eponymous Lifehouse in 2005, Who We Are in 2007, Smoke and Mirrors in 2010, and Almería in 2012. These albums have spawned the singles "You and Me", "First Time", and "Whatever It Takes", which have all been top 40 hits in the US.

To date, Lifehouse has sold over 15 million singles and albums worldwide, approximately 5 million of which are albums.

Jason Wade had been writing songs since his parents' divorce as a coping mechanism. After moving to Los Angeles in 1995, he met bassist Sergio Andrade, his next-door neighbor.[5] The following year, Wade, Andrade, and Jon "Diff" Palmer formed "Blyss", the forerunner of Lifehouse, and began to play live shows at high schools and colleges.[5][6][7] Later, Collin Hayden and Aaron Lord were added to the band.[8]

Soon thereafter, word-of-mouth reached producer Ron Aniello, who introduced the band to Jude Cole, who in turn introduced them to DreamWorks Records principal Michael Ostin.[6][9] In 1998, Anniello produced Blyss's first demos, with the financial backing of DreamWorks Records. Some of these recordings would form the 1999 EP Diff's Lucky Day, which would be sold at live concerts or distributed among friends and music industry contacts.[8]

In 2000, Blyss changed its name to "Lifehouse".[10] On their choosing the band name, frontman Jason Wade said, "It's about what we do as a band and for me personally. Most of this record is about my life and about life's circumstances. Not only my life, but other peoples' lives. We thought Lifehouse was a good name for it."[11]

No Name Face met significant commercial success and established the band, and eventually would sell in excess of 4 million copies worldwide.[6] This was in part due to the success of "Hanging by a Moment", Lifehouse's first commercial single. Due to the charisma and talent of frontman Wade, DreamWork Record's focus was primarily on him.[12] "Hanging by a Moment" was the third song in chart history to be named the "No. 1 Song of the Year" on the Billboard Hot 100 despite not having reached No. 1 on any weekly Billboard Hot 100 survey (after Sam the Sham & The Pharaohs' "Wooly Bully" in 1965 and Faith Hill's "Breathe" in 2000). The second single from the album, "Sick Cycle Carousel", was not as commercially successful as "Hanging by a Moment", but peaked at No. 35 on the Billboard Modern Rock chart, and the third and final single was "Breathing", a reworking of a song that was featured on Diff's Lucky Day.

The song "Everything" was the first of many Lifehouse songs to be featured in the future hit WB drama Smallville.[8] Seven of the band's songs would be featured in episodes of the series' first four seasons, and the band itself would perform live at the Smallville prom at the end of the fourth-season episode "Spirit". The song, "You and Me", would be released on the series' second soundtrack, Smallville: The Metropolis Mix, in an extended form, subtitled the "Wedding Version" ("You and Me (Wedding Version)"). The song "Everything" was also used in the series' 200th episode, "Homecoming", in the show's 10th and final season, as an homage to the series pilot and first-season finale episodes.[13]

The song "Somewhere in Between", also from No Name Face, was featured in the first-season episode of Falcon Beach, "The Blame Game".[14]

By the release date of Lifehouse's début album, October 31, 2000, Palmer had left the band, and Wade and Andrade were the only remaining founding members.[6] Soon after recording No Name Face, Wade and Andrade met Rick Woolstenhulme, who auditioned for the needed drummer part and joined the band as full-time drummer.[6] Before the audition, Woolstenhulme had been rehearsing in an adjacent room to Lifehouse and frequently he and Wade would pass each other without meeting the other.[7]

Shortly after a long tour for No Name Face, Lifehouse reentered the studio to cut their second album, Stanley Climbfall. The album's initial success was short-lived and its singles, "Spin" and "Take Me Away", were vastly overshadowed by the success of the first album. Shortly after the album debuted, Rick's brother Sean Woolstenhulme (of The Calling) officially became the fourth member of the band in June 2002. He had previously toured with Lifehouse.

Jason Wade and Rick Woolstenhulme remained the active members of Lifehouse. In late 2004, Bryce Soderberg (previously of AM Radio) signed on as Lifehouse's new bassist. On July 6, 2004, they went to Maryland to begin work on their eponymous third album. Lifehouse was released on March 22, 2005 and was produced by John Alagia.

The album's first single, "You and Me", was released for airplay on January 18, 2005. It was written several years prior and was originally performed by Jason Wade in the 2000 independent film All Over Again. The song was a success and stayed on the U.S. Billboard Hot 100 for 62 weeks (the fifth longest-charted in history), peaking at No. 5. The song also appears on the soundtrack to Smallville. One episode, "Spirit", featured the band actually performing it and three other songs from the album ("Come Back Down", "Blind", and "Undone") on the show. The song has also appeared on Cold Case, Boston Legal, Gavin & Stacey, Everwood, Grey's Anatomy, The 4400 and Medium. The song "All In All" was featured in Scrubs.

In 2006, the song "Good Enough" was featured in the Disney film The Wild and was repeated over the end credits.[15]

Main article: Who We Are (Lifehouse album)

Their fourth album, entitled Who We Are, was released on June 19, 2007.[16] The album features Wade, Woolstenhulme and Soderberg as its lineup, and "rocks a little harder" than their previous album, according to the band.[17] The album was recorded in Kiefer Sutherland and Jude Cole's recording studio, Ironworks Studios, in Los Angeles. The album's release was followed by a tour with The Goo Goo Dolls and Colbie Caillat, which began June 15 at the Dodge Theatre in Phoenix, AZ,[18] after which the band embarked on a "worldwide headlining tour".

"Broken", the album's third single,[21] has appeared on several TV series, including Grey's Anatomy ("Lay Your Hands On Me"), Criminal Minds ("In Birth and Death", season 3, episode 2), One Tree Hill, One Life To Live and The Hills. Most recently, it was featured in the motion picture soundtrack The Time Traveler's Wife. It peaked at No. 83 on the Billboard Hot 100. The music video for "Broken" officially debuted on VH1's Top 20 Countdown on September 20, 2008.

The song "Who We Are" was used in an advertisement on A&E to promote their original programming.

Lifehouse held a contest to make a video for the song "Make Me Over".[22] The band gave 60 USC School of Cinematic Arts graduate students a chance to shoot the video for their new single. The winning video premiered at a gala event on December 5, 2008 at the Paley Center for Media in Beverly Hills, CA.[23]

On April 11, 2009, the band announced that Ben Carey was an official member of the band. They said that they had been "a four piece for some time" and that Ben is "family to us". Ben had been touring with the band since 2004.[25]

Lifehouse announced in August 2008 that they would be starting on their fifth album, which was tentatively scheduled for a late 2009 release. The band entered the studio on November 12, 2008 to begin working on the project. They stated in an interview at ESPN Magazine's NEXT Party during Super Bowl XLIII that the album should be released in late 2009.[26] Lifehouse revealed during their 2009 tour that the album would also include the band's previously released single "From Where You Are." It was announced on October 15 that the new album would be called Smoke & Mirrors and would be released on December 8, 2009. However, on November 13, 2009, the band stated on its web page that it would now be released on February 2, 2010.[27] The first single was "Halfway Gone", which was released on October 27, 2009. The music video premiered on the VH1 Top 20 on VH1.com at the end of November.[28] The album was released in a standard, deluxe, and two-disc deluxe edition. On December 22, Tommy2.net reported that the album had been pushed back once again, this time to February 23, 2010.[29] The album was then delayed again, but was released on March 2, 2010.

The album debuted at No. 6 on the Billboard 200 with 54,203 sold. This marked the highest chart debut of their ten-year career, beating out first week chart position for their 2002 sophomore set Stanley Climbfall, which debuted at No. 7.[30]

In August 2011, Lifehouse announced on their official Facebook page that they were working on their sixth studio album.[31]

On September 11, 2012, Lifehouse released a new single featuring Natasha Bedingfield entitled "Between the Raindrops". A month later, on October 18, the band announced that the title of their sixth studio album would be Almería.

Almería was released on December 11 in the US and December 12 worldwide.

On July 24, 2013, Jason posted a letter on the band's Facebook page saying that Lifehouse has parted with Geffen but will continue to make new music.

Shortly after the death of George Harrison, the band performed an acoustic rendition of "Something" on Last Call with Carson Daly.

The band has also covered the Keane single "Somewhere Only We Know" live on Yahoo! Music. The group also stated that Keane's album Under the Iron Sea was their favorite album of 2007.

In 2007, the band did a cover of The Rolling Stones' "Beast of Burden" for the Stripped Music Sessions. The band says that they wanted to "pay homage to the godfathers of rock".[32]

Jason Wade wrote the song "From Where You Are" for Allstate's Teen Driving Program. The song was featured on the "Tall Lights" commercial and aired on NBC.[33]

This article uses material from the article Lifehouse (band) from the free encyclopedia Wikipedia and it is licensed under the GNU Free Documentation License.

Love Of The Common People Paul Young
Update Required To play the media you will need to either update your browser to a recent version or update your Flash plugin.