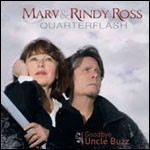 Quarterflash is an American rock group formed in 1980 in Portland, Oregon. The band was originally made up of the two current members, Rindy Ross (lead vocals and saxophone) and her husband Marv Ross (guitars), along with Jack Charles (guitars), Rick DiGiallonardo (keyboards/synthesizers), Rich Gooch (electric bass), and Brian David Willis (drums and percussion).[1] Having a lead singer who also played the saxophone made Quarterflash notable. In a 1982 interview, Rindy Ross said that she viewed the saxophone as an extension of her voice, enabling her to express things she could not express with her voice alone.[2]

The group was formed by merging two popular Oregon bands, Seafood Mama and Pilot (not to be confused with the Scottish band of "Magic" fame).[3][4][5] Continuing under the name Seafood Mama, the band originally released the picture-sleeved single "Harden My Heart" on a local private label, Whitefire Records, in the spring of 1980 (with the B-side track being "City of Roses"). "Harden My Heart" was a big hit on Portland radio stations and got the band a one-hour TV special, Seafood Mama In Concert, on KOIN on June 5, 1980. "Harden My Heart" would later be rerecorded by the band after they renamed themselves Quarterflash. The name came from an Australian slang description of new immigrants as "a quarter flash, three quarters foolish", which the Rosses found in a book at producer John Boylan's house.[1][6]

Quarterflash signed to Geffen Records and released their self-titled debut album Quarterflash in September 1981. It reached No. 8 on Billboard's Top LPs & Tape chart, and sold over a million copies, earning RIAA platinum status on June 30, 1982. The album contained the new version of "Harden My Heart", which became their biggest single, reaching No. 3 on the Billboard Hot 100 (and the Top 20 in France). The follow-up single from the album, "Find Another Fool", reached No. 16. A second one-hour Portland television special, Quarterflash In Concert, was broadcast on KOIN on October 22, 1981, and simulcast on KGON. This concert was taped at the Arlene Schnitzer Concert Hall on October 15, 1981.

In between albums, the band appeared on soundtracks of two of 1982's biggest films, charting the theme to Ron Howard's Night Shift up to #60 on the Billboard Hot 100, and landing one of their B-sides, "Don't Be Lonely", in Fast Times at Ridgemont High.

In 1990, Quarterflash reunited, hiring session musicians, including bassist–vocalist Sandin Wilson, drummer Greg Williams, guitarist Doug Fraser, and Mel Kubik on saxophone and keyboards. The group released Girl in the Wind on Epic Records. In 1991, Rindy and Marv Ross founded the historic music ensemble The Trail Band, which was formed at the request of the Oregon Trail Advisory Council to commemorate the 150th anniversary of the Oregon Trail.[7]

In June 2008, Marv and Rindy Ross released a new Quarterflash album, Goodbye Uncle Buzz, but it did not chart.[8] In September 2013, the band released a new album, Love Is a Road.[9]

This article uses material from the article Quarterflash from the free encyclopedia Wikipedia and it is licensed under the GNU Free Documentation License.

Misty Mind Lina Button
Update Required To play the media you will need to either update your browser to a recent version or update your Flash plugin.