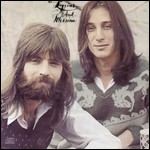 Loggins and Messina is an American rock-pop duo consisting of Kenny Loggins and Jim Messina who achieved their success in the early to mid-1970s. Among their well-known songs are "Danny's Song", "House at Pooh Corner", and "Your Mama Don't Dance". After selling more than 16 million records and becoming one of the leading musical duos of the 1970s,[1] Loggins and Messina broke up in 1976. Although Messina would find only limited popularity following the breakup, Loggins went on to be a 1980's hitmaker. In both 2005 and 2009, Loggins and Messina have rejoined for United States tours.

Jim Messina, formerly of Poco and Buffalo Springfield, was working as an independent record producer for Columbia Records in 1970 when he met Kenny Loggins, a little-known singer/songwriter who was signed to ABC-Dunhill.

The two recorded a number of Loggins' compositions in Messina's home living room. When Columbia signed Loggins to a six-album contract (with the assistance of Messina), recording began in earnest for Loggins' debut album, with Messina as producer. Messina originally intended to lend his name to the Loggins project only to help introduce the unknown Loggins to Messina's well-established Buffalo Springfield and Poco audiences. But by the time the album was completed, Messina had contributed so much to the album - in terms of songwriting, arrangement, instrumentation, and vocals - that an "accidental" duo was born.

Their debut album was released November 1971 as Sittin' In. The album's first single release, the Caribbean-flavored "Vahevala" (or "Vahevella"), found top 3 success on WCFL on 18 May 1972.[2] Although the album went unnoticed by radio upon release, it eventually gained traction by autumn 1972, particularly on college campuses, where the pair toured heavily. Loggins' and Messina's harmonies meshed so well that what was begun as a one-off album became an entity unto itself. Audiences regarded the pair as a genuine duo rather than as a solo act with a well-known producer. Instead of just continuing to produce Loggins as a sole performer, they decided to record as a duo Loggins & Messina.

"When our first album, 'Sittin' In,' came out, we started receiving a lot of excitement about the music and good sales," Messina recalled in 2005. "We had a choice. It was either I now go on and continue to produce him and we do the solo career or we stay together and let this work. For me, I did not desire to go back out on the road. I had had enough of that, and I wanted to produce records. But Clive Davis (then president of the record company) intervened and said, 'You know, I think you'd be making a mistake if you guys didn't take this opportunity. Things like this only happen once in a lifetime. It may merit you sleeping on it overnight and making a decision that will be in your best interest.' He was absolutely correct. Kenny made the decision as well. It delayed his solo career, but it gave him an opportunity, I think, to have one."[1]

Over the next four years they produced five more original albums, plus one album of covers of other artists' material, and two live albums. They sold 16 million records and were the most successful duo of the early 1970s, surpassed later in the decade only by Hall & Oates.[1] Their work was covered by other artists such as Lynn Anderson who recorded "Listen to a Country Song" released in 1972 and reached #3 on the charts, and perhaps most notably Anne Murray, who reached the U.S. top ten with "Danny's Song" in early 1973 and the U.S. top twenty with "A Love Song" in early 1974. A greatest-hits album, The Best of Friends, would be released a year after the duo had separated. The later studio albums often found both Loggins and Messina more as two solo artists sharing the same record rather than as a genuine partnership. As both Loggins and Messina noted in 2005, their collaboration eventually became more a competition - a frequent, almost-inevitable dynamic of show business duos.

Never really a team of true equals due to the "teacher/apprentice" nature of their music experience levels, the pair had by early 1976 quietly but amicably parted to pursue solo careers, following the release of Native Sons. Messina found solo success elusive, but Loggins went on to become one of the biggest hitmakers of the 1980s.

The two reunited in 2005 to choose tracks for an expanded compilation album of singles and album cuts The Best: Sittin' In Again, which proved successful enough for them to embark on tour together. Their successful "Sittin' In Again" tour was launched in mid-2005 and played out the remainder of the year. They also released an album that year of the tour. "Every couple of years we'd talk about it, but I was having too much fun as a solo artist," Loggins said that summer. "It was very rewarding for me, and I wasn't ready to share the reins. I still had a lot of stuff to do on my own, to prove myself and to express myself, in a way that wouldn't have fit in with Loggins & Messina."[1]

The two were pleased enough to consider future Loggins and Messina projects and the two also toured in 2009. "Like most relationships, we were a moment in time," Loggins said. "It's just really fun to be able to go back and celebrate that and just sort of really honor each other as grown men, in a way we never really did back then. We were young and competitive and didn't realize that it wasn't necessarily all about getting your way, but you learn that if you grow up."[1]

Their backing band changed from album to album, with the core members listed below. Many albums featured backing members who were well known in their own right, John Townsend and Ed Sanford, later of the Sanford & Townsend Band ("Smoke from a Distant Fire"), contributed vocals and songwriting to the Native Sons, their final studio album.

This article uses material from the article Loggins and Messina from the free encyclopedia Wikipedia and it is licensed under the GNU Free Documentation License.

(Left A) Pretty Scar Adrian Solo
Update Required To play the media you will need to either update your browser to a recent version or update your Flash plugin.