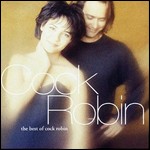 Cock Robin is an American pop rock band, mostly popular in the 1980s, particularly in continental Europe where they became famous. The band was founded by singer-songwriter Peter Kingsbery in 1982, disbanded in 1990, and reformed in 2006.

Named after a 17th-century story titled "The Marriage of Cock Robin and Jenny Wren", the band formed in San Francisco, California and was signed to CBS Records. Cock Robin's eponymous debut album was produced by Steve Hillage. It was largely ignored in their native country, as with the majority of their output, but it was an overnight success in Europe, especially in Belgium, France, Germany, Italy, Portugal and the Netherlands, where the singles "When Your Heart Is Weak", "The Promise You Made" and "Thought You Were On My Side" became big hits (with for example the latter two singles peaking at number 1 and number 4 respectively in the Dutch-speaking part of Belgium[1]), and the album itself a chart-topper. "When Your Heart Is Weak" was the band's only chart single in the U.S., where it reached No. 35 in the late summer of 1985. It also became a radio favorite in South Africa in early 1986.

In mid-1987, the band, reduced from the original quartet to the duo of Peter Kingsbery and Anna LaCazio, released a second album, After Here Through Midland, produced by Don Gehman, who had previously worked with John Mellencamp, among others. As with their debut, Cock Robin's second album attracted much attention in continental Europe where it reached the Top 5 and also scored hits with the singles "Just Around the Corner", "The Biggest Fool of All" and "El Norte".

Two years later, in 1989, the band released their third, and, to many critics, most accomplished album, First Love/Last Rites, with Roxy Music veteran Rhett Davies in the role of producer. As with their previous releases, the LP fared well in mainland Europe, but, due to poor management and promotion, failed to make an impact in the USA. The duo went their separate ways shortly after the release of the album and a European Tour, with Kingsbery releasing a string of solo projects (3 albums in English, 1 in French) in France, most notably a hit single "Only the Very Best", recorded for the Michel Berger & Luc Plamondon concept musical album "Tycoon", with English lyrics by Tim Rice in 1992. Anna LaCazio recorded her own solo album Eat Life circa 1992-93 but it was only officially released in its entirety for download in 2009.

In 2006, after a 15-year hiatus, Cock Robin reformed, releasing their fourth album, I Don't Want to Save the World with the help of former band member Clive Wright and all 13 new songs recorded in Los Angeles. They also performed a number of sold-out concerts in France.

They did a few more concerts in 2009 in Europe and released a Live album of songs recorded during their 2009 concerts.

Their fifth studio album Songs From A Bell Tower was released on 11 October 2010 on several legal download platforms and in CD format with 2 versions (the stand-alone album with 11 songs and a 2-CD Limited Collector edition including the album on the first CD accompanied with an extensive booklet and the 'Live' album released in 2009 on the second CD) only available so far from the French music store FNAC. The album was recorded in Los Angeles with the help of drummer Pat Mastelotto. Again the duo have made a few appearances on French television and radio and on the internet in October and November. 2011 saw the band heavily touring in France, Belgium, Italy, the Netherlands and Germany. May 2011 saw the re-release of 'Songs From the Bell Tower' on German label Blackbird Music, including their 2008 live-album as a bonus-CD. In June 2011 "Now and Then (Umpff Remix)", a reworking of the 'Songs From a Bell Tower'-track by Danish producer/remixer Umpff was released. In October 2011 Cock Robin started touring again in France and in Spain, the mini tour lasted until August 2012.

On 20 June 2012, Peter Kingsbery announced in his blog on the official Cock Robin website cockrobinmusic.com that "there will be a new tour next Summer 2013 with a new album"[2]

Another Cock Robin-remix by Umpff - "Extraordinary Thing" - appeared on "Mixtape" from Mabel The Label in October 2012.

This article uses material from the article Cock Robin (band) from the free encyclopedia Wikipedia and it is licensed under the GNU Free Documentation License.

Don't Make It Too Hard Lee Everton
Update Required To play the media you will need to either update your browser to a recent version or update your Flash plugin.