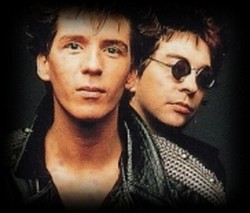 Simon Climie and Rob Fisher met at Abbey Road Studio, where they were both performing as session musicians.[1] The duo is best known for the 1987 hit single "Love Changes (Everything)" which won an Ivor Novello Award.[2][3] It reached number 2 in the UK[4] and, on re-release, in South Africa, 7 in Germany, 8 in Switzerland, 15 in Austria and 23 in the US, all in 1988. The hip hop-styled remix of "Rise to the Occasion" had also previously reached Number 10 in the UK Singles Chart[4] and reached later Number 1 in South Africa, Number 14 in Germany, Number 17 in Sweden and Number 19 in Austria. Their last hit single was "Love Like A River" in 1989, which reached Number 18 in Austria, Number 22 in the UK[4] and Number 54 in Germany. They wrote most of their own material together with Dennis Morgan, who Climie had previously worked with; and hired Steve Lillywhite and Stephen Hague as producers.[1] Although their first album Everything charted in both the UK (#14) and US (#120), their second album Coming In for the Kill (UK #45) was less successful and they split up shortly after its release.[1]

Fisher later co-wrote Rick Astley's song, "Cry for Help" single (UK #7 in 1991). He also contributed as songwriter to Astley's albums Free (1991) and Body & Soul (1993). He died on 25 August 1999 during surgery for bowel cancer. Simon Climie had, before the success of Climie Fisher, co-written (with Dennis Morgan) the George Michael/Aretha Franklin single "I Knew You Were Waiting (For Me)" in 1986. He worked as a producer for recording artists such as Louise, MN8 and Five Star and as a co-songwriter and musician for Eric Clapton, including the album with J.J. Cale (featuring Derek Trucks and Billy Preston) The Road to Escondido. Climie released a solo album and single, both titled "Soul Inspiration" in 1992. He also worked with former Doobie Brothers member Michael McDonald on his Motown albums. He produced the 2009 album by the American Idol winner Taylor Hicks, titled The Distance.

The folk pastiche 'The Ballad Of Climie Fisher' by Half Man Half Biscuit is a fictional tale of what happened to the pair post breakup.

This article uses material from the article Climie Fisher from the free encyclopedia Wikipedia and it is licensed under the GNU Free Documentation License.

You Weren't There Lene Marlin
Update Required To play the media you will need to either update your browser to a recent version or update your Flash plugin.