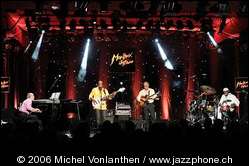 Fourplay is a contemporary American smooth jazz quartet. The original members of the group were Bob James (keyboards), Lee Ritenour (guitars), Nathan East (bass), and Harvey Mason (drums).[1] In 1997, Lee Ritenour left the group and Fourplay chose Larry Carlton as his replacement. In 2010, Larry Carlton left Fourplay and was replaced by Chuck Loeb,[2] who died on July 31, 2017.[3] During Loeb's illness, saxophonist Kirk Whalum joined the group for occasional performances.

The group has enjoyed consistent artistic and commercial success by grafting elements of R&B and pop to jazz, appealing to a broad mainstream audience. Their debut album, Fourplay (1991), sold over a million copies and remained at the number one position on the Billboard contemporary jazz chart for 33 weeks. Their next LP, 1993's Between the Sheets, reached number one, went gold, and received a Grammy nomination. In 1995, their third gold album, Elixir, also reached the number one position and remained on the chart for more than 90 weeks. The band celebrated its 25th anniversary with the release of the album Silver in 2015, which featured former members Ritenour and Carlton as guest artists.

This article uses material from the article Fourplay from the free encyclopedia Wikipedia and it is licensed under the GNU Free Documentation License.

Every Breath You Take Police
Update Required To play the media you will need to either update your browser to a recent version or update your Flash plugin.