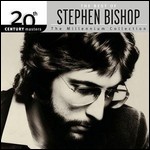 Bishop was born in San Diego, California, and attended Will C. Crawford High School.[1] He had a major hit in 1977 with the song "On and On", which was a Number 11 hit in the U.S.; his other hits include "Save It for a Rainy Day", "Everybody Needs Love", "Something New in My Life" and "It Might Be You", the theme from the movie Tootsie. He has also performed many movie themes, including the theme from National Lampoon's Animal House which he sang in falsetto. He also provided his talent to the theme song in the Christmas movie All I Want for Christmas.

His song "Separate Lives", sung by Phil Collins and Marilyn Martin from the movie White Nights, was nominated for an Academy Award in 1985, losing to "Say You, Say Me" from the same film. Bishop wrote the song about his breakup with actress Karen Allen, who also appeared in Animal House. Bishop said: "I write much better when I'm heartbroken and sad or melancholy."[2]

Bishop also wrote the theme to the 1984 remake of the movie Unfaithfully Yours, entitled "One Love (Unfaithfully Yours)". The song received regular airplay during this period, usually on soft rock / adult contemporary radio stations. Despite moderate radio success, a soundtrack for the movie was never released. The song eventually appeared on Bishop's best-of compilation album Best of Bish. The only other known pressing of this song is on a promotional vinyl 45.[3]

In 1989 he released his fifth album, called Bowling In Paris (mixed with the Sleeping With Girls sessions) with Phil Collins (co-producer and musician on some songs), Eric Clapton, Sting, Steve Lukather, Ronnie Caryl, Michael Omartian (producer and musician on several tracks), Mo Foster, Adrian Lee, and more. In 1987, the Norwegian swing/pop duo Bobbysocks! recorded "Walking on Air" (as "Walkin' on Air") on their LP Walkin' on Air.

In addition to singing the theme song off-screen, Bishop had a cameo role in National Lampoon's Animal House as the aspiring folk singer whose guitar John Belushi smashes. Bishop still keeps the smashed guitar as a memento. He appeared in another John Landis movie, The Blues Brothers as the "charming trooper" who breaks his watch during the mall chase. Bishop also had a cameo in The Kentucky Fried Movie (1977), appearing as a hustler in the infamous "Catholic High School Girls in Trouble" segment. He was the musical guest on the March 11, 1978, episode of NBC's Saturday Night Live. Bishop also contributed the song The Heart Is So Willing for the 1986 remake of the film Mr. Blandings Builds His Dream House, called The Money Pit, starring Tom Hanks and Shelley Long. He also sung the end credit song, "We Can Do Anything", from Barney's Great Adventure. Patrick Bateman, the fictional anti-hero from Bret Easton Ellis' American Psycho, is an avowed fan of Bishop. He also provided soundtrack music for the Michael Douglas movie The China Syndrome.. Somewhere in Between.

Im Summärwind (Lover's Lullaby) Sina
Update Required To play the media you will need to either update your browser to a recent version or update your Flash plugin.