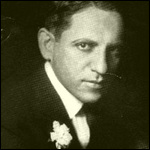 Gus Edwards (18 August 1879 – 7 November 1945) was an American songwriter and vaudevillian. He also organised his own theatre companies and was a music publisher.

Edwards was born Gus Simon in Hohensalza (Inowrocaw), German Empire. When he was seven, his family moved to the United States, ending up in the Williamsburg neighborhood of Brooklyn. During the day, he worked in the family cigar store, and in the evenings, he wandered looking for any sort of show business job. He found work as a singer at various lodge halls, on ferry boat lounges, in saloons, and even between bouts at the athletic clubs. There is a story that in the early 1890s Edwards met up with famed prizefighter John L. Sullivan, by then working in vaudeville, who was so impressed with the youngster that he decided to employ him in his act.

As a very young boy, Edwards worked as a song plugger at Koster and Bial's, at Tony Pastor's theatre, and at the Bowery Theatre. In those old vaudeville days, song publishers would often hire a very young boy to sit in the theatre, and immediately after a vaudeville star had sung one of the publisher's songs, the youngster would stand up in the audience, and pretending to be completely overcome by the song, break out in an "extemporaneous" solo of the same tune. In this way, the young Edwards would often sit in a balcony seat, and then stand and repeat a song that vaudeville stars such as Maggie Cline, Lottie Gilson or Emma Carus had just sung.

In 1896, Edwards was just 17 years old and appearing at Johnny Palmer's Gaiety Saloon in Brooklyn, when James Hyde, a vaudeville agent, saw him performing. He booked a tour for Edwards and four other boys as The Newsboys Quintet act. In 1898, while performing in this act, Edwards wrote his first song, to a lyric by Tom Daly, "All I Want is My Black Baby Back". Edwards could not write music at that time, so he hired Charles Previn to write down the notes. May Irwin sang the song in her act, and helped to popularize it.

While entertaining soldiers at Camp Black, during the Spanish-American War, Edwards met lyricist Will Cobb, and they formed "Words and Music", a partnership that lasted for many years. He was a vaudeville singer, and later had his own vaudeville company. He discovered Walter Winchell, Elsie Janis, Eddie Cantor, the Marx Brothers, Lila Lee, Eleanor Powell, Hildegarde, Ray Bolger, Sally Rand, Jack Pearl, the Lane Sisters, and Ina Ray Hutton. He wrote the Broadway stage scores for "When We Were Forty-One", "Hip Hip Hooray", "The Merry-Go-Round", "School Days", "Ziegfeld Follies of 1910", "Sunbonnet Sue", and "Show Window". He founded the Gus Edwards Music Hall in New York, and also his own publishing company, then produced special subjects for films, and returned to vaudeville between 1930 and 1937, finally retiring in 1939. His chief musical collaborators included Edward Madden, Will Cobb, and Robert B. Smith. His other popular-song compositions include "Meet Me Under the Wisteria", "By the Light of the Silvery Moon", "I Can't Tell You Why I Love You but I Do", "Goodbye, Little Girl, Goodbye", "I Just Can't Make My Eyes Behave", "I'll Be With You When the Roses Bloom Again", "He's My Pal", "Way Down Yonder in the Cornfield", "In Zanzibar", "If a Girl Like You Loved a Boy Like Me", "Jimmy Valentine", "If I Were a Millionaire", "Laddie Boy" and "In My Merry Oldsmobile".

Edwards was the brother of Leo Edwards, and the uncle of Joan Edwards and Jack Edwards.

Bing Crosby played Edwards in a fictionalized version of his life in the 1939 film The Star Maker, directed by Roy Del Ruth. Edwards himself made few screen appearances, the most notable being The Hollywood Revue of 1929, in which he performs as part of a vaudeville act. He also wrote all the music for The Hollywood Revue of 1929, as credited in the closing credits of the production, with the exception of "Singin' in the Rain" with lyrics by Arthur Freed and music by Nacio Herb Brown. He also performs a specialty number: "Lon Chaney's Gonna Get You If You Don't Watch Out".

Edwards was a founder member of ASCAP in 1914 and was inducted into the Songwriters Hall of Fame in 1970.

Note: All shows are musicals unless otherwise stated.

Shout Tears For Fears
Update Required To play the media you will need to either update your browser to a recent version or update your Flash plugin.