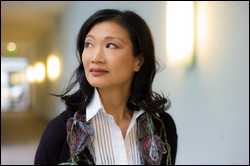 Mari Kodama (児玉 麻里, Kodama Mari) (born 1967) is a classical pianist who has performed at festivals and other venues in Europe, North America and Japan.

She was born in Osaka, Japan in 1967 and raised in Germany and Paris, France[1] due to her father's postings in these countries as well as Switzerland and England.[2] She and sister Momo, are daughters of a pianist mother and banker father. Their mother gave up performances for teaching and Mari assuming everyone played piano. She wanted to begin play at age 2, but her parents thought she was too young. She was able to read notes by age three. By the age of 10, she had already decided to be a concert pianist deciding not to return to Japan to prepare for university.[2] She studied piano at the Conservatoire de Paris starting at age 14, under Germaine Mounier, and chamber music under Geneviève Joy-Dutilleux and while still a teenager, was performing in various European competitions. She made her Japanese debut in 1984 at age 17 and was immediately a success.[2]

Her first major debut was in 1987 playing Prokofiev's Piano Concerto No. 3 with the London Philharmonic.[2] Kodama made her debut at Carnegie’s Weill Recital Hall in 1995.[3]

She has collaborated with Tatiana Nikolaeva and Alfred Brendel,[3] as well as her sister Momo Kodama at a various venues including the 2014 Festival Internacional Cervantino.[4]

Kodama has performed throughout Europe, the United States, and Japan, and has appeared at venues such as Mostly Mozart, Bard Music Festival, the Hollywood Bowl, California’s Midsummer Mozart Festival, and European festivals such as those in Lockenhaus, Lyon, Montpelier, Salzburg, Aix-en-Provence, Aldeburgh, Verbier, La Roque D’Antheron and Évian.[3]

In 2002, she gave her final performance of the complete Beethoven piano sonata cycle, which she presented over three consecutive seasons in Los Angeles and Pasadena, California.

Kodama is a founding member of chamber music festivals in San Francisco, Sapporo, and Gmunden. She and her husband, conductor Kent Nagano, present Musical Days at Forest Hill, an unusual festival that among all her initiatives has most caught her interest.

Kodama is married to conductor Kent Nagano.[5] They have one daughter, Karin Kei Nagano.[6]

Girls Are Up For Fun Two Out Loud
Update Required To play the media you will need to either update your browser to a recent version or update your Flash plugin.