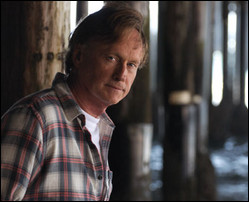 Page was born May 16, 1953 in Keokuk, Iowa. His parents, Robert and Joyce Page, were both professional musicianshe a singer and choral director, she an accomplished organist, pianist, and singer. The family of seven (Page has a sister and three brothers, who are all musicians) landed in Montgomery, Alabama in the mid-1950s where his parents worked as music directors at a local Methodist church. His mother knew Richard had a special interest in the family "business" when he came home from Sunday school to announce that he was the only baritone in the four-year-old class.

In the late 1960s, the family moved to Phoenix, Arizona where Page attended Central High School, performing in school musicals such as Oliver!

His first major band, Pages, was formed with his childhood friend, Steve George, after he moved to Los Angeles from San Diego in the late 1970s. After producing three "Pages" albums, Page and George formed Mr. Mister along with Steve Farris and Pat Mastelotto.

As lead vocalist for Mr. Mister, Page scored two consecutive Hot 100 No. 1's with the singles "Broken Wings" and "Kyrie". Prior to Mr. Mister's breakthrough 1985 No. 1 album, Welcome to the Real World, he turned down the opportunity to be a lead singer with the groups Chicago and Toto. The position that he turned down with Chicago was accepted by Jason Scheff. Mr. Mister would release three albums before breaking up on September 25, 1990. A fourth Mr. Mister album, Pull was recorded in 1989, but ultimately never released (BMG Japan cancelled plans to release the album in 2001). However, in December 2008 Richard Page told the Internet radio station 957StarFM about plans to release Pull on his new website: "I'm in the process of getting it back from the record company and publish it on the website."

Subsequently he was a member of Third Matinee with Patrick Leonard, before he released his first solo album Shelter Me in 1996. It featured the singles "The Best Thing" and "My Oxygen", a remake of Nik Kershaw's hit. In 1997, he turned down an offer from Leonard to record a second Third Matinee album.

Page performed his own material in December 2008 for the first time since Shelter Me. The song entitled "I Always Cry at Christmas" was co-written with Walter Afanasieff. In 2010 Page released two of his own song collections, Peculiar Life and 5 Songs for Christmas. These were followed by Solo Acoustic (2011) and Songs from the Sketchbook (2012).

Richard lives with his wife Linda and their four children in Malibu in Southern California.

Page has been both a primary band member in various groups, as well as background vocalist for other artists.

Timbuktu I Skarbonari
Update Required To play the media you will need to either update your browser to a recent version or update your Flash plugin.