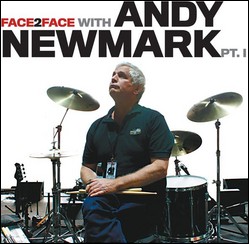 Andrew Newmark (born July 14, 1950)[1] is an American session drummer who is well known as the onetime drummer for Sly and the Family Stone, and has also played with numerous other artists, particularly British acts such as John Lennon, Pink Floyd, David Bowie and Roxy Music.

Andrew Newmark was born on July 14, 1950, in Port Chester, New York, and raised primarily in the nearby suburb of Mamaroneck. His mother was Bermudian, and his father, Charles W. Newmark, was an Assistant District Attorney from 1938 to 1940 in New York City under then District Attorney Thomas E. Dewey. First taking up the drums at the age of nine, Newmark gradually honed his craft and was taking paid gigs at age 15.[2] Visiting his mother's native Bermuda frequently throughout his youth, Newmark made the decision to move there on a more permanent basis at the age of 16.[1] Newmark played in the Bermuda Jam, a Bermuda band that included former Savages guitarist Paul Muggleton.

One of his first prolific gigs was recording with a young Carly Simon, and he is featured on Simon's 1971 album Anticipation as well as her follow-up album, No Secrets. These, and other early sessions segued into a more permanent role as a member of the funk band Sly and the Family Stone from 1972 to 1973. Hired to replace Gerry Gibson, who in turn had replaced founding Family Stone member Greg Errico, Newmark was invited to audition for Sly Stone by Family Stone saxophonist Pat Rizzo.[3] Newmark went on to record one album as the Family Stone's drummer, Fresh (1973) and also performed with the band for two years in live concert. And had played Beautifully Sweet Beat time on a Bread Recording 'LA Session to Artist' Giants.

In 1980, Newmark was the sole drummer on John Lennon's last album, Double Fantasy, as well as Milk and Honey released in 1984. He was also the featured drummer on Yoko Ono's Season of Glass in 1981. His connection with the Double Fantasy album was reprised in 2012 with his contributions to the Lennon Bermuda tribute album[7] on several tracks including those by Paul Carrack, Bryan Ferry, Nils Lofgren and Rocky and the Natives.

Newmark uses Yamaha drums, Remo drum heads, Zildjian cymbals and Vic Firth drumsticks. His drum setup and cymbals vary slightly with who he plays with, but generally favors a setup consisting of a bass drum, rack tom, snare drum, and then one or two floor toms. He plays a mix of Zildjian A and K cymbals.

With Sly and the Family Stone

You Have What It Takes A-ha
Update Required To play the media you will need to either update your browser to a recent version or update your Flash plugin.