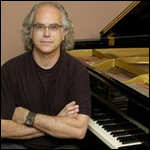 Mitchel Forman began studying classical piano at the age of seven. At 17 he entered the Manhattan School of Music (MSM) for three years of study and began working with bands in New York. Shortly after graduating from MSM he began touring and recording with Gerry Mulligan, playing in both Mulligan's big band and quartet, and work with Stan Getz followed. In 1980 Forman's solo career began with a piano performance at the Newport Jazz Festival. This recording became his first album, Live at Newport. In subsequent years he worked on the road with Phil Woods, Carla Bley, Mel Tormé, and Astrud Gilberto. Forman also recorded two solo piano albums for Soul Note and toured in Europe regularly. He joined guitarist John McLaughlin for a year and a half on the road, recording and contributing to two of the band's recordings - the seminal Mahavishnu and Adventures in Radioland. Forman then joined ex-Weather Report saxophonist Wayne Shorter, touring, recording and contributing to Shorter's Phantom Navigator.

Forman continues to record and play under his own name and has recently started his own record label, Marsis Jazz. Recent releases include Mr. Clean and Patience, both on Marsis. He also co-leads the band Metro with guitarist Chuck Loeb. Metro's five albums, the debut Metro, the follow-up Tree People (Lipstick), Metrocafé, Grapevine and Metrolive have all met with critical acclaim. The quartet with Wolfgang Haffner on drums and Mel Brown on bass tours annually in Europe. Forman has been a member of the Rick Braun band for the last three years, a member of the new BWB band, has been featured on the last three Jeff Golub CDs, and as of 2006 was performing around Los Angeles with drummer Virgil Donati, as well as with his own groups.

Show You ZIAN
Update Required To play the media you will need to either update your browser to a recent version or update your Flash plugin.