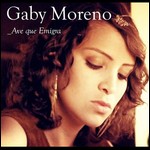 Maria Gabriela Moreno Bonilla (born 16 December 1981 in Guatemala City, Guatemala), known as Gaby Moreno, is a Guatemalan singer-songwriter and guitarist. Her music ranges from blues, jazz, soul to R&B, . Moreno sings both in English and Spanish. She has recently become known to a broader audience in Latin America, after recording a song with Ricardo Arjona (Fuiste tu, 2011). In 2013, she recorded covers of the popular songs "Kiss of Fire" and "The Weed Smoker's Dream" with Hugh Laurie for his album Didn't It Rain.

KCRW's Ariana Morgernstern, producer of Morning Becomes Eclectic, featured Moreno in an October 2008 podcast and bestowed "Today's Top Tune" status on her song "Song of You." She said she was "caught by surprise with its organic and understated feel. She sings beautifully both in English and Spanish."[1]

NPR.org reviewed Moreno's debut record Still the Unknown and said: "Whether Moreno decides to stick with pop, soul or Latin (or a fusion of all three) for future releases, Still the Unknown is a promising debut that indicates she won't go unnoticed for much longer." NPR.org - Gaby Moreno Song of You [2]

In 2006, she won the Grand Prize in the John Lennon Songwriting Contest with her song "Escondidos," first in the Latin category, then overall.

In July 2010 Moreno was nominated alongside her co-writer Vincent Jones for an Emmy in the category of "Outstanding Main Title Theme Music" for their theme song to NBC's "Parks and Recreation.".[3]

A Latin Grammy Award is an accolade by the Latin Academy of Recording Arts & Sciences to recognize outstanding achievement in the music industry.

Broken Lifehouse
Update Required To play the media you will need to either update your browser to a recent version or update your Flash plugin.