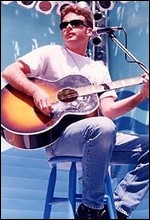 Jamie Walters (born James Leland Walters Jr. June 13, 1969) is an American actor, singer, firefighter and record producer, best known for his roles on Beverly Hills, 90210 and The Heights and his number one[1] single "How Do You Talk to an Angel".

Walters was born in Boston, Massachusetts[2] and grew up in Marblehead, Massachusetts.[3] After graduating from high school, Jamie Walters attended New York University and studied film for two years and studied acting at The Actors Space in New York City.[4]

While attending college, he was discovered at a bank by a casting agent who placed him in three high profile commercials for Levi's 501 Jeans. He then moved to Los Angeles to pursue an acting and musical career. He played a bit role on Everyday Heroes. His film debut came in 1991 with the movie Shout, alongside John Travolta, Heather Graham, and Gwyneth Paltrow. Walters performed the song "Rockin' the Pad" on the Shout soundtrack album.

In 1992, Aaron Spelling cast Jamie as the lead on the Fox series The Heights, in which he also sang the theme song "How Do You Talk to an Angel?." The single reached #1[1] on the Billboard Hot 100 on November 14, 1992 knocking Boyz II Men's "End of the Road" from the top spot. It was also nominated for an Emmy Award for "Outstanding Individual Achievement in Music and Lyrics". (The award went to Liza Minnelli.) The show was canceled by Fox, but it launched Jamie's music career when Atlantic Records took an interest in Walters and signed him to a recording contract.

In October 1994, Aaron Spelling created a role especially for Jamie on Beverly Hills, 90210, casting him as Ray Pruit, the musician-boyfriend of Donna (played by Tori Spelling). Jamie was a cast member of the hit show for two seasons until November 1996, when he asked Spelling to leave the show to focus on his music career.

On September 20, 1994, Jamie released his self-titled debut album Jamie Walters. The first single from the album "Hold On" peaked at no. 16 on the Billboard Hot 100.[5] Jamie made appearances on MTV and various shows to promote the album, and also had a nationwide tour. The album sold over 1 million copies and was certified platinum.[6]

In 1997, Jamie released his second album 'Ride'. The album was certified gold.[6]

In 2009, Walters appeared in the VH1 reality show Confessions of a Teen Idol, in which former teen idols attempt to resurrect their careers.[7]

In 1995, he said his favorite songs were American Girl by Tom Petty and Take the Money and Run by Steve Miller Band.[8]

In 2002, Walters married Patty Walters. They met at Centinela Hospital, where they were both EMTs. He and Patty have 3 daughters.[10]

Walters also has a son named Noah from a previous relationship.

Live It Up Mental As Anything
Update Required To play the media you will need to either update your browser to a recent version or update your Flash plugin.