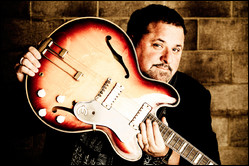 DiPiero was born in the steel-manufacturing center of Youngstown, Ohio. His family later moved to the suburban township of Liberty, Ohio, where DiPiero graduated from Liberty High School in 1969.[1] He went on to graduate from Youngstown State University's Dana School of Music. He participated in hard rock bands in northeastern Ohio throughout the late 1960s and 1970s. In 1979, DiPiero moved to Nashville, where he initially worked as a session player and traveling musician but gradually moved into songwriting.[1]

DiPiero's first number one hit as a songwriter was 1983's "American Made" by The Oak Ridge Boys, which also became a national ad jingle for Miller Beer and Baby Ruth candybar.[2] Since then, DiPiero has co-written countless hit singles for other country music artists, with 15 of his songs reaching No. 1 on the country music charts.[3] In 1995 and 1996, he received the Triple Play award from the Country Music Association for having three number one singles chart in each of those years. In addition, he has received 36 awards from BMI for his contributions as a songwriter.[3][4] He was also one third of the country music supergroup Billy Hill, whose members also included Dennis Robbins and John Scott Sherrill.

He has helped make Nashville a port of call for legendary performers from all genres, writing with Neil Diamond, Carole King, Johnny Van Zant and Delbert McClinton, among many others.

At one point, DiPiero was married to country music artist Pam Tillis, the daughter of singer Mel Tillis. The couple divorced. On June 18, 2006, he married Leslie Tomasino.[5]

This article uses material from the article Bob DiPiero from the free encyclopedia Wikipedia and it is licensed under the GNU Free Documentation License.

Summer Of Love Jefferson Airplane
Update Required To play the media you will need to either update your browser to a recent version or update your Flash plugin.