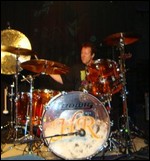 Herman 'Ze German' Rarebell (born 18 November 1949 as Hermann Erbel) is a German drummer, best known for his time in the band Scorpions from 1977 to 1995, during which he played on eight studio albums. Rarebell was an important composer in the history of the group, writing classic songs like "Another Piece of Meat", "Falling in Love" and the second single from Savage Amusement "Passion Rules the Game". He wrote the lyrics for some of the band's classic songs such as "Rock You Like a Hurricane", "Make It Real", "Dynamite", "Blackout", "Arizona", "Bad Boys Running Wild", "Don't Stop at the Top", and "Tease Me Please Me".

Rarebell has been a long time user of Ludwig drums and Paiste cymbals, which he used for his entire duration with Scorpions, though he would occasionally alter the amount of drums and cymbals he would have on his setup.

Rarebell also occasionally used cymbals from Paiste's 3000 series as well upon their release in 1986, but would still usually stick to a mostly 2002 series setup.

This article uses material from the article Herman Rarebell from the free encyclopedia Wikipedia and it is licensed under the GNU Free Documentation License.