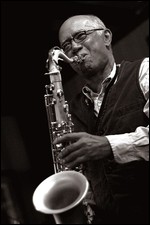 Themen was born on 26 November 1939 in Manchester. In 1958 he began his medical studies at the University of Cambridge, going on in 1961 to complete his studies at St Mary's Hospital Medical School in London, qualifying in 1964. He specialised in orthopaedic medicine, eventually becoming a consultant.

Themen started playing jazz with the Cambridge University Jazz Group, and then in London playing with blues musicians Jack Bruce and Alexis Korner. In 1965 he played with the Peter Stuyvesant Jazz Orchestra in Zürich, going on to play with such English luminaries as Michael Garrick and Graham Collier's Music.

In 1974 he entered on what was to be one of his central musical relationships when he started playing with Stan Tracey. He has played with all of Tracey's groups, touring with him all over the world as well as around the UK. He has also played and toured with musicians such as Nat Adderley, Ian Carr, George Coleman, and Al Haig.

In 1995 he formed a quartet with pianist John Critchinson.

His style originally owed much to the influence of Dexter Gordon and Sonny Rollins, but later influences included such disparate saxophonists as Coleman Hawkins, Evan Parker, and the sheets of sound John Coltrane.

Art is now concentrating on his jazz career, following his recent retirement as consultant orthopaedic surgeon.

This article uses material from the article Art Themen from the free encyclopedia Wikipedia and it is licensed under the GNU Free Documentation License.