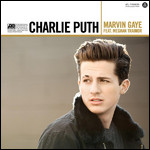 "See You Again" was released as Puth's debut single in 2015, which he co-wrote, co-produced, and performed with Wiz Khalifa for the Furious 7 soundtrack as a tribute to Paul Walker, it peaked at number one on the US Billboard Hot 100 for 12 non-consecutive weeks. After the success of "See You Again", he subsequently gained worldwide recognition for multiple subsequent releases, including his debut single "Marvin Gaye", which featured vocals from Meghan Trainor. The song topped charts in New Zealand, Ireland, and the United Kingdom.

Puth's debut studio album, Nine Track Mind, was released in January 2016,[1] and was preceded by the singles "One Call Away" and "We Don't Talk Anymore", which peaked at number 12 and number 9 respectively on the US Billboard Hot 100.

In 2017, he released his new singles "Attention" and "How Long" from his upcoming album, "Voicenotes". "Attention" peaked at number 5 on Billboard Hot 100.[2]

Charles Otto Puth Jr. was born December 2, 1991, in Rumson, New Jersey,[3] to Debra, a music teacher[4][5] who also wrote commercials for HBO,[6] and Charles Puth, a builder and real estate agent.[4] His father is Catholic[7] and his mother is Jewish.[8] He has two younger siblings, twins Stephen and Mikaela.[4]

As a two-year-old, Puth's right eyebrow was permanently scarred in a nearly fatal dog-bite incident.[9]

Puth has perfect pitch, a rare auditory phenomenon that enables him to identify or recreate music, without a reference tone.[4][5][6][10] His mother introduced him to classical music and began teaching him the piano at age 4.[11] He started studying jazz at age 10[11] and participated in a summer youth jazz ensemble at Count Basie Theatre's Cool School[5] in Red Bank, New Jersey at 12.[12] He was hired by The Count Basie Theatre to play in a Charlie Brown production.[5] In grade six, he went door to door selling a Christmas album called Have a Merry Charlie Christmas that he had recorded and produced, making $600 in sales.[11][13]

He attended the Holy Cross School, Rumson, and Forrestdale Middle School,[10] before graduating from the Rumson-Fair Haven Regional High School in 2010.[14] During his seventh grade to senior years, he attended Manhattan School of Music Pre-College[15] as a jazz piano major and a classical studies minor.[10][16] Puth graduated in 2013 from the Berklee College of Music, where he majored in music production and engineering.[17]

In September 2009, he started his own YouTube channel, entitled Charlies Vlogs, posting comedy videos and acoustic covers.[18] In 2010, Puth released the music video of his first song, "These Are My Sexy Shades".[19] On December 2010, he released his debut extended play, The Otto Tunes, an independent release.[20] In 2011, he won an online video competition sponsored by Perez Hilton, Can You Sing?, with a version of Adele's "Someone like You" which he performed with Emily Luther.[15] In the same year Ellen DeGeneres announced that she had signed Puth and Luther to her label, eleveneleven, after seeing their performance of Adele's "Someone like You".[21] Puth had performed the song on the show.[22] In December 2012 he released a promotional single, "Break Again", with additional vocals by Emily Luther.[23] The music video was released days later.[24] On January 25, 2012, Puth and Luther performed the song and Lady Antebellum's "Need You Now" on The Ellen DeGeneres Show.[25] Puth also performed at an event supporting DKMS Delete Blood Cancer, the world's largest bone marrow donor center, in October 2012.[26] Puth left eleveneleven in late 2012.

On October 23, 2013, he released his second independent extended play, Ego, to streaming online.[27][28] Puth was credited with the production and writing of songs and jingles for fellow YouTube personalities. He wrote the theme song for Shane Dawson's Shane and Friends podcast and skits, the intro jingle for the videos of the Vlogger family the SHAYTARDS, the original theme song for Charles Trippy's vlog Internet Killed Television, and a song for the tour and movie of YouTube group Our 2nd Life, as well as several singles for Our 2nd Life member Ricky Dillon. In 2014 he released the promotional single "L.U.V."[29] The music video was directed by Andrew Vallentine[30] In the same year, he co-wrote the song "Celebrate" on Pitbull's eighth studio album Globalization.[31]

In early 2015, Puth signed with Atlantic and his previous records were removed from iTunes.[32] In February 2015, Puth released his debut single "Marvin Gaye", which features guest vocals from Meghan Trainor.[33] The single has been certified 2× Platinum in Australia, topped the charts in New Zealand, Ireland, and the United Kingdom, and peaked at number 21 on the US Billboard Hot 100.[34][35] Puth wrote, co-produced, and was featured on a song with Wiz Khalifa, "See You Again", a tribute to the late Paul Walker, included in the Furious 7 soundtrack. While Khalifa wrote the rap lyrics, the rest of the song has been credited to Puth. The song peaked at number one on the Hot 100 chart for 12 non-consecutive weeks.[36][37] "See You Again" was nominated for three Grammy Awards: Song of the Year, Best Pop Duo/Group Performance and Best Song Written for Visual Media. It was also shortlisted for the Song of the Year for the BBC Music Awards and was nominated for the Golden Globe Award for Best Original Song at the 73rd Golden Globe Awards.[38] He produced the song "Slow Motion" for Trey Songz and has arranged sessions with Jason Derulo and Lil Wayne.[39]

Puth starred as Meghan Trainor's love interest in the music video of "Dear Future Husband," released in March 2015. In the video, she meets Puth on an online dating service and he comes to Trainor's home with a carryout pizza, which succeeds in impressing her.[40] On May 1, 2015, Puth released a five-song extended play, Some Type of Love.[41] In June 2015, he released the promotional single "Nothing but Trouble" with Lil Wayne, from the soundtrack to the documentary 808: The Movie.[42] During 2015, Puth worked on several albums of other artists. He co-wrote and produced the "Broke" and "Pull Up" for Jason Derulo's album Everything Is 4,[43] co-wrote "Bombastic" with Bonnie McKee from the album with the same title,[44] and produced "Working Class Heroes (Work)" on CeeLo Green's album Heart Blanche.[45]

Pre-orders for Puth's debut studio album Nine Track Mind began on August 20, 2015, along with the second single "One Call Away". The song peaked at number 12 in the United States, 26 in the United Kingdom and 4 in Australia.[46] As of February 2016, the song has sold 513,700 copies domestically.[47] Puth released a remix for the song, entitled "One Call Away (Coast to Coast Mix)", featuring American rappers Tyga and Ty Dolla Sign, country recording artist Brett Eldredge and Mexican singer Sofia Reyes.[48]

His debut album, Nine Track Mind, was released on January 29, 2016.[49] The album debuted at number three in the United Kingdom.[50] The album itself peaked at number 6 on the Billboard 200, receiving a score of 37 out of 100 on Metacritic, becoming the 15th worst reviewed album on the site.[51] Puth embarked his debut live concert, Nine Track Mind Tour, in March 2016.[52]

On April 21, 2017, Puth released the lead single, "Attention", from his upcoming second album, Voicenotes, which is set to be released during winter in 2018.[54] The singer has stated the album departs lyrically from his debut by avoiding the direction of "love ballads".[55] The second single off of Voicenotes, "How Long", was released on October 5, 2017.[56]

This article uses material from the article Charlie Puth from the free encyclopedia Wikipedia and it is licensed under the GNU Free Documentation License.

Day Off Martin Schenkel
Update Required To play the media you will need to either update your browser to a recent version or update your Flash plugin.