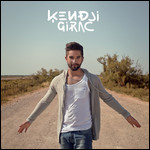 Kendji Girac (born Kendji Jason Maillié,[1] July 3, 1996) is a French singer. He is the winner of Season 3 of the music competition The Voice: la plus belle voix as part of Team Mika. He has released two studio albums, Kendji and Ensemble as well as a string of hit singles.

The youngest of a Romani family, Kendji grew up in Saint-Astier and was taught to play the guitar and sing by his grandfather. He left school at 13 to follow the family business as an arborist.[2] His first language is Catalan. [3]

For The Voice: la plus belle voix, he auditioned with "Bella" from Maître Gims in the second episode of season 3 broadcast on January 18, with only judge Mika turning his chair, whereas the three others, Florent Pagny, Jenifer and Garou refrained. He won with 51% of the public vote.

His first official single was the bilingual French/Spanish "Color Gitano", released in June 2014 from his EP,[4][5] his official album released in September. In December 2014, he won two NRJ Music Awards for Francophone Breakthrough of the Year and "Color Gitano" as Francophone Song of the Year.[6] His album Kendji sold 600,000 copies by January 2015,[7] and over 1 million copies by October 2015,[8] certifying Diamond and becoming France's second highest selling album of 2014 after Racine Carrée by Stromae. As of now, he is nearing in 1,2 million copies sold.[9] He is currently the biggest selling The Voice alumni, worldwide.

This article uses material from the article Kendji Girac from the free encyclopedia Wikipedia and it is licensed under the GNU Free Documentation License.

Eye In The Sky Alan Parsons Project
Update Required To play the media you will need to either update your browser to a recent version or update your Flash plugin.