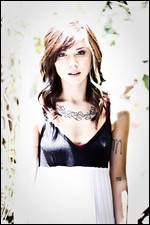 Christina Judith Perri (born August 19, 1986)[1] is an American singer and songwriter from Bucks County, Pennsylvania. After her debut single "Jar of Hearts" was featured on the television series So You Think You Can Dance in 2010, Perri signed with Atlantic Records and released her debut extended play, The Ocean Way Sessions. Her debut studio album, Lovestrong (2011), followed soon after and has since been certified platinum by the Recording Industry Association of America (RIAA).[2]

Perri also gained recognition for writing and recording "A Thousand Years", the love theme for the film The Twilight Saga: Breaking Dawn – Part 2 (2012), which appears on the accompanying soundtrack. The song went on to sell over 4 million copies in the United States, being certified 4× platinum. She later released her second extended play, A Very Merry Perri Christmas (2012), followed by her second studio album, Head or Heart (2014).

Perri was born in Bensalem, Pennsylvania (a suburb of Philadelphia), the daughter, and younger child of Mary and Dante Perri.[3] She has an older brother, Nick Perri, who formerly played guitar with Shinedown, Silvertide, Perry Farrell and Matt Sorum and cousin Dominic Perri[4][5] Her father is from Italy and her mother from Poland.[6]

She graduated from Archbishop Ryan High School in 2004.[7] She taught herself how to play guitar as a 16-year-old by watching a videotape of Shannon Hoon from the group Blind Melon performing on VH1.[8] She attended college as a communication major for a year before dropping out to pursue a music career.

She frequently sang and acted in musical theatre as a child. Perri claims to have learned to play piano and guitar because she missed hearing music being played in the house when she moved away. According to Perri, whenever she played the guitar or piano, she would sing and "all of a sudden these songs would appear."[6]

Perri moved to Los Angeles on her 21st birthday. According to Perri, she felt terrified of being over 3000 miles away from her family, saying that she "cried [her] eyes out every day".[9]

Later that year she married and began to produce music videos for a living. She divorced 18 months later and moved into a small apartment on her own to focus entirely on working on music. She moved back to Philadelphia by the end of 2009; it was during this time that she wrote "Jar of Hearts". She later moved back to Los Angeles, waitressing at the Melrose Cafe during the day and recording at night.[8][10]

Perri's song "Jar of Hearts" was featured on So You Think You Can Dance during the show of June 30, 2010 in a performance by Billy Bell and Kathryn McCormick.[11] Perri's friend Keltie Knight passed the song to show choreographer Stacey Tookey, as Perri was unsigned at the time. Perri and Colleen watched the performance in the audience.[12] Following its exposure on the show, "Jar of Hearts" sold 48,000 digital copies in its first week, debuting on the Billboard Hot 100 at No. 63 and reaching No. 28 on Billboard's Hot Digital Songs.[11] Within a month, it had sold more than 100,000 copies.[10] The song peaked at number 17 on the Hot 100.

In July 2011, Perri embarked on her first world tour, the Lovestrong Tour, which lasted for almost exactly a year and consisted of 71 dates. Perri released her single "A Thousand Years", which appeared on the soundtrack of The Twilight Saga: Breaking Dawn – Part 1, on October 18, 2011. The song debuted at number 63 on the Billboard Hot 100 and peaked at number 31, but has been certified 4× platinum with over 4 million sales in the US alone since.[17] The song is Perri's most successful single to date. The album's third and final single, "Distance", was released on March 20, 2012.

Perri also announced in San Juan, Puerto Rico during her Lovestrong Tour that she had begun to work on her second studio album.[18] In addition, in late 2012 Perri was the opening act for Jason Mraz's concert tour, the "Love Is a Four Letter Word Tour", across continental North America in 2012.

On August 1, 2012, she announced via Facebook that A Very Merry Perri Christmas EP would be released on October 16, 2012. The album consisted of one original song, "Something About December", which served as the lead single, as well as four covers.[19] Perri re-recorded "A Thousand Years" for The Twilight Saga: Breaking Dawn – Part 2 soundtrack with guest vocals from Steve Kazee, titled "A Thousand Years, Pt. 2". On May 14, 2013, she received the BMI award for her song "A Thousand Years" at the 61st annual BMI Pop Awards held in Beverly Hills, California.[20]

In 2013, Perri began regularly tweeting and posting pictures on Instagram regarding her second studio album's progress using the hashtag "#albumtwo". In February, Perri partnered with the non-profit organization To Write Love on Her Arms on a three-stop tour to raise money for the charity and debuted a brand new song from her second studio album, titled "I Believe", at the shows.[21] On June 21, Perri tweeted announcing that the second album was coming together.[22]

On November 11, 2013, Perri announced that her first single from her new album is called "Human". The song was released on November 18, 2013, on iTunes. Perri performed the song on The Queen Latifah Show the same day.[23] On November 28, 2013, Perri revealed that her second studio album would be titled Head or Heart and it was released on April 1, 2014. On May 29, it was announced that she would open Demi Lovato's new North American World Tour's dates.[24] Perri later announced that her second concert tour would be titled the Head or Heart Tour, which began in April 2014.[25]

On June 9, she released the second single from her second album, "Burning Gold". with the video released on August 1. On December 19, 2014, Perri performed in the annual "Christmas in Washington" holiday concert.[26]

In May 2016, Perri announced via her Instagram that she was currently working on her third album.

In June 2016, it was announced that Perri would feature on the title track of Lindsey Stirling's third studio album, Brave Enough.[27] The album was released on August 19, 2016.[28]

This article uses material from the article Christina Perri from the free encyclopedia Wikipedia and it is licensed under the GNU Free Documentation License.

Best Friend Paul Etterlin
Update Required To play the media you will need to either update your browser to a recent version or update your Flash plugin.