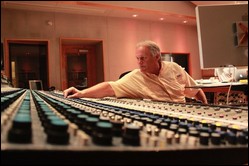 In May 2010 Nichols was diagnosed with stage 4 pancreatic cancer. He died from the disease at his home, surrounded by his family, on April 9, 2011.[1][3] In his subsequent New York Times obituary, Nichols was referred to in the headline as an "Artist Among Sound Engineers." [4]

The Roger Nichols Recording Method, his long-awaited guide to audio engineering, was released by Alfred Music Publishing on June 17, 2013. [5]

Roger Nichols was born in Oakland, California. His father was an U.S. Air Force B-47 pilot; as a result the Nichols family lived in various spots in the U.S. for the first eleven years of his life. In 1957 his family settled in Cucamonga, California, where Nichols attended High School. One of his classmates was Frank Zappa; Zappa would drop by Nichols' house to "play guitar, and we would do multiple passes of guitars and bounce them together" on Nichols' first recording device, a reel-to-reel tape deck using quarter inch tape.

He attended Oregon State University where he studied nuclear physics. From 1965 to 1968 he was a nuclear operator at the San Onofre Nuclear Generating Station (aka SONGS).[6][7]

From nuclear operator to recording engineer

Nichols and some friends created their own recording studio, Quantum Studios, in Torrance, California in 1965. The facility originally was a four-car garage; it was converted into a four-track studio to record high school bands. A hi-fi supply store, created as a side business by Nichols and his partners, brought in clients and contacts that led to recording commercials, with future stars Karen Carpenter and Larry Carlton performing on some of the spots; another musician Nichols recorded in this era was the former Mouseketeer Cubby O'Brien, on the drums. Nichols also recorded Kenny Rogers, then with the First Edition; the studio was expanded into a former post office and upgraded to 16 tracks.[6]

Sales of recording equipment and machinery to ABC Records' first recording studio led to a contact with Phil Kaye, who was in charge of the facility. Nichols was hired in 1970 to maintain the equipment and do engineering work with Kaye and Steve Barri. Some of the clients Nichols recorded at this time included John Phillips and Denny Doherty of the Mamas and the Papas, the Grass Roots, and Hamilton, Joe Frank and Reynolds.[6]

In 1971 Nichols met Gary Katz, newly hired at the ABC Dunhill label as a record producer. Walter Becker and Donald Fagen were also working at ABC as song writers; one night Nichols was drafted, when no one else on the staff wanted to be involved, to stay and engineer a demo session that Becker and Fagen were holding to record their tunes for use by other artists.[8] Nichols discovered he had a great deal in common with the then-unknown duo, including sharing a taste for impeccable audio quality. Nichols was asked to engineer their first record album in 1972, and he would wind up working with Katz, Becker and Fagen in recording the first, decade-long incarnation of the band that became known as Steely Dan.[7]

"Nichols once ascribed his close professional connection with Steely Dan and Mr. Katz to the obsession they all had with getting the most out of the technology in the recording studio.

Were all perfectionists, Mr. Nichols said. It wasnt a drag for me to do things over and over until it was perfect. He added: It would have driven a lot of other engineers up the wall. In my own way, Im just as crazy as they are. " - Conclusion of Roger Nichols' New York Times obituary by noted music writer Ben Sisario.[9]

Engineering the birth of Steely Dan

As a result of working with Nichols, Becker and Fagen and producer Katz were determined to have him seated behind the recording console for the 1972 start of studio sessions their first album, Can't Buy a Thrill. This conflicted with Nichols' summer vacation, and the decision was made to postpone recording until Nichols returned, much to ABC president Jay Lasker's annoyance, due to the amount of money advanced to the fledgling band. Once begun, the process was exacting. Nichols later commented: "We finished it in six months, which was quick for them. But even then their acceptance level was way above everyone else's. They never had the attitude of 'It's getting late that's good enough', or 'No-one else will notice'. Everything had to be as near perfect as technically and humanly possible." The album sold well and yielded two hit singles, ensuring Nichols would be tied to the band's fortunes.[10] Nichols was involved in engineering every Steely Dan album. [11]

Interviewed in 1993 for 'Metal Leg, the Steely Dan Magazine', Nichols stated (regarding his nickname that appears on many of his credits): "...they were trying to kill me. I was working on a Johnny Winter session on the weekends, with Steve Barri all day and with Steely Dan all night, so they had me going 24 hours a day. They tried running me into the ground, but it didn't work. Then there was the time when we were working at Cherokee Studios when two of the tape machines were grounded improperly and I touched both of the machines and everything shorted out. The face plate on one of the machines was completely melted but I didn't feel a thing. They figured something weird was going on." [6][12]

In an interview after Nichols death, Donald Fagen stated that "The Immortal" name came from Roger's likeness to Lee Majors, "The Six Million Dollar Man".

Innovations for 'Countdown to Ecstasy', and 'The hand'

When Becker and Fagen expressed frustration during the band's second album Countdown to Ecstasy with the difficulty in acquiring a steady drum tempo, Nichols was forced to improvise. The track Show Biz Kids had proved especially challenging in regards to a steady beat. As quoted in Brian Sweet's biography of Steely Dan, Reelin' in the Years, Nichols recalled:

"It was just one of those tunes that that was so very difficult to play exactly in tempo, with every instrument in sync. ... There were no drum machines in those days, so we made a 24 track, eight bar tape loop, which at 30 ips was a considerable length of tape, trailed it out through the door into the studio, around a little idler which was set up on a camera tripod, back into the studio and then copied that to a second 24 track machine. Everything was on tape except the lead vocal and the lead guitar. It worked like a dream." [13]

The album's back cover photograph featured a photo of Steely Dan in the recording studio control room, and included Nichols' seemingly disembodied hand on the mixing console while he hid beneath it.[14]

After the third Steely Dan album Pretzel Logic and the tour by the band in support of it, Steely Dan ceased touring and turned into a band that only performed on recordings. Nichols' duties became more diverse, and ranged from diagnosing a flaw on the master tape of the band's biggest selling single, Rikki Don't Lose That Number, (a workman's gob of mustard on the tape was found by Nichols to be to blame), to helping to recover the sound on their fourth album, Katy Lied, which had been recorded at ABC Studios and had suffered when the master tape was processed through a faulty dbx noise reduction system while mixing.[15]

Nichols would win three Grammy Awards (Best Engineered Recording  Non-Classical) for his late 70's-early 80's "meticulous studio work" [12] with the band on Aja, FM (No Static at All) and Gaucho and won three additional Grammys, including the notable achievement 'Album Of The Year' for his efforts on the Steely Dan comeback album, Two Against Nature (2000).[16]

In 1978, Nichols pioneered the technique of "digital drum replacement" by inventing the Wendel sampling computer, which was used to provide some of the drum and percussion sounds on Steely Dan's album, Gaucho, notably the song Hey Nineteen. This technology is now commonplace in music production around the world.[17] He invented and produced a rubidium nuclear clock under his company name Digital Atomics. The purpose of the clock was to provide the accuracy of nuclear timekeeping to better synchronize digital recording equipment in the studio, but at a lower cost than the typical cesium clocks such as those used in military and aviation applications.

Roger Nichols was a pro audio columnist and gear reviewer for many years at EQ, a professional audio magazine.[12] He also wrote prose extensively, including material for master classroom use, which he intended to turn into a textbook on recording technique. He did not live to see the final publication of his works, the first of which, The Roger Nichols Recording Method, has been compiled and edited by his wife Conrad Reeder and Mike Lawson for Alfred Music Publishing, under the oversight of Alfred CEO Ron Manus, who in early 2013 stated We are so thrilled to have the opportunity to publish Rogers work. I can think of no better way to honor his memory and legacy than by making his unparalleled experience and knowledge available to the world. Reeder stated, I am especially grateful to Ron Manus, Mike Lawson and the entire Alfred Publishing team for ensuring that a new generation will benefit from Rogers artistry and inventive brilliance in the recording studio by releasing The Roger Nichols Recording Method. Roger would also be thrilled about it, especially since Alfred CEO Ron Manus, was once his 2nd Engineer in the studio. [18]

Nichols lectured before numerous audiences, including as a guest lecturer for the Berklee School of Music, University of Miami, and Recording Workshop. [19]

Nichols was also a scuba diving instructor, an avid photographer, and an airplane pilot, and was close friends and flying buddies with singer/songwriter John Denver.[20] Nichols engineered and produced albums for Denver over a nearly twenty-year period, including the 1998 children's railroad train album titled All Aboard! which earned Denver his first Grammy, awarded posthumously. Nichols was on his way to California to fly with Denver in his new experimental Long-EZ plane when he learned of the crash in which Denver was killed. [21]

He was married to writer/musician Conrad Reeder with whom he had two daughters, Cimcie & Ashlee. [12]

In 2006 Nichols' work was formally recognized by The Recording Academy (Grammys) Producers and Engineers Wing.

This article uses material from the article Roger Nichols (recording engineer) from the free encyclopedia Wikipedia and it is licensed under the GNU Free Documentation License.

Papà Perché Zucchero
Update Required To play the media you will need to either update your browser to a recent version or update your Flash plugin.